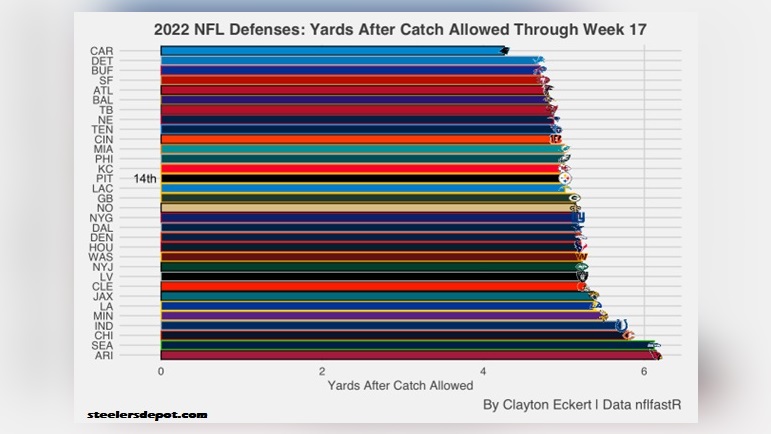 Today I wanted to take a look at air yards and yards after the catch (YAC) for NFL defenses in the passing game, with the goal of seeing how the Pittsburgh Steelers have stacked up. From a total passing yards perspective, Pittsburgh has allowed 3,606 yards on the season which ranks 21st on the season. Let’s get right to it, starting with completed and intended air yards allowed through week 17 to begin to gain context for how these yards have come: 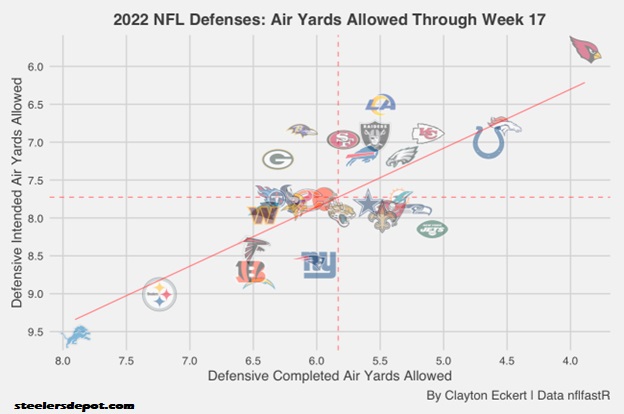 Right away we can see the Steelers are at the bottom of the league in air yards allowed, with a completed air yards number of 7.2 and an intended air yards of nine that each rank 31st in the league. This largely has to do with allowing 53 explosive passes on the season, which ties for 27th in the NFL. Both numbers are discouraging, and the drop off in completed air yards from the rest of the NFL is important to note, allowing offenses to connect far too often. Considering this team has not been ahead in many games in 2022 which would typically lead to a worse result, this has to be a big room for improvement goal moving forward.

Looking from a player level in terms of explosive air yards allowed, Steelers cornerback Cameron Sutton has highlighted the cornerback room, targeted 14 times and allowing only two completions for only 56 yards, along with two interceptions for an outstanding 14.3% completion rate and 4.2 passer rating against, with the latter ranking ninth amongst NFL cornerbacks! Pittsburgh cornerback Levi Wallace has been targeted at a similar rate (13) but allowed 196 yards (by far the most on the team) including a touchdown allowed, but also has two interceptions, allowing a 30.8% completion rate and a 65.9 rating against which is third amongst Steelers cornerbacks. Arthur Maulet has had the third most snaps for the team playing in every game this season, and targeted four times on explosive passes allowing a 75% catch rate and a 116.7 rating against. Pittsburgh cornerback James Pierre has played in ten games, and has been targeted twice with no catches allowed, for a great 39.6% rating against that ranks second.

Then we have cornerback Ahkello Witherspoon, who played in four games earlier this season, who was targeted four times in the explosive range, allowing a 75% catch rate, 100 yards (second most), with all three receptions going for touchdowns for the worst rating against possible (156.3), woof. Safety Minkah Fitzpatrick has allowed the third most yards on the team (96) including a touchdown and an interception, a 33.3% catch rate on six targets for an 81.9 rating against. Fellow safety Terrell Edmunds has been targeted four times, allowing a 50% catch rate for 61 yards, a touchdown, and a 135.4 rating against. Very important context at the extreme end of the air yards as we gain perspective. 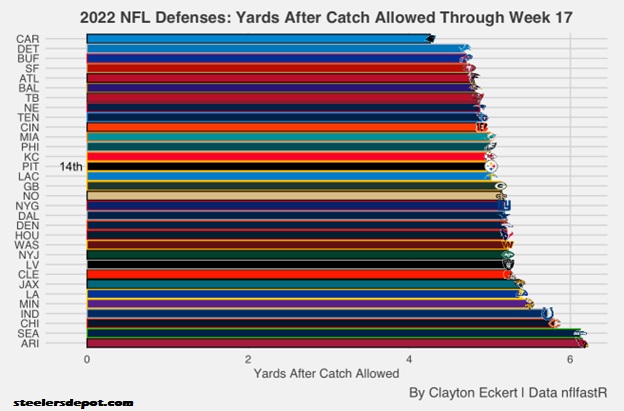 As expected, several teams that fared well in the air yards view fare worse in this YAC view (namely Arizona). The Steelers rank 14th in 2022 in this regard, allowing YAC number of five on the season. The results are very close in the ranks above them, within a decimal point to the tenth-ranked Bengals, important context to an overall strong aspect of the 2022 unit compared to recent seasons in tackling the catch. From a player level, linebackers have given up quite a bit of YAC. As many would expect, Robert Spillane tops this list allowing 251 YAC, while Myles Jack comes in at second most with 227. Wallace has allowed the most YAC amongst Steelers cornerbacks on the season with 197 yards, followed by Maulet at 180 YAC allowed. Linebacker Devin Bush is fifth on the team with 162, and Edmunds comes in at 136 YAC allowed. The final two players that have played at a high volume and stack up impressively once again are Sutton (120 YAC) and Fitzpatrick with 108, impressive results comparatively considering each player in this group has played at least 14 games.

I also wanted to look at this data since the Steelers’ bye week, and here’s how teams have fared in the eight games since week 10: 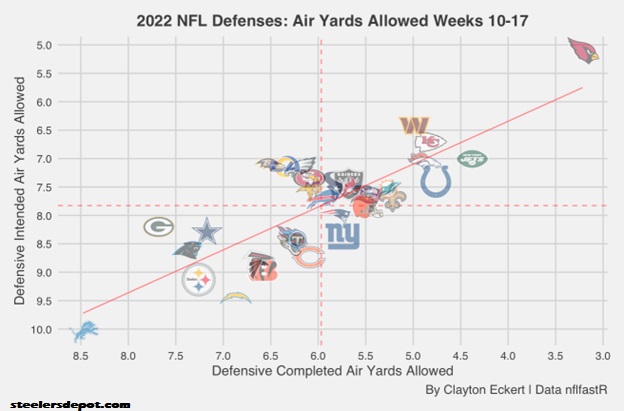 Believe it or not, Pittsburgh’s numbers are slightly worse in this time frame 7.3 completed air yards and 9.1 intended air yards compared to 7.2 on the season and nine on the season but slightly improved ranks of 29th and 30th since their bye. This is a bit of a surprise considering a healthier team overall, and highlights the consistent issues this season as a pass defense. They have improved recently in allowing explosive passes, 17 of them since week 10 which ties for fifth best in the NFL, but a big difference from the season rates is 69 passing plays allowed of ten yards or more.

To close, here are the YAC results since week 10: 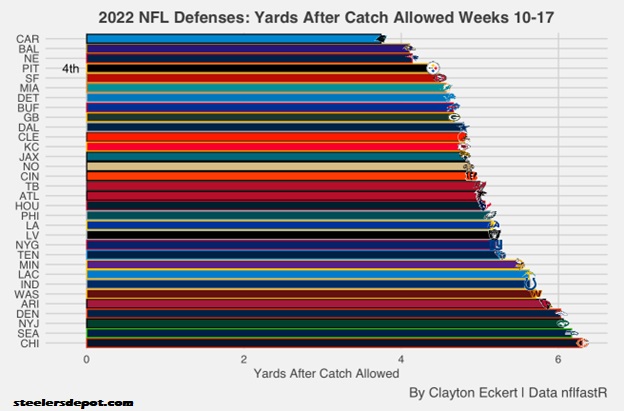 Right away we can see Pittsburgh’s strong results, ranking fourth in the NFL since their bye week in YAC allowed! This really highlights a huge positive trend to their season average of five mentioned earlier, only allowing 4.4 since week ten! This aligns with our own Josh Carney’s missed tackles reports that have improved throughout the season and is hopefully a new norm and identity moving forward. Since week ten, Spillane has allowed the most YAC by far at 123, and Jack comes in at 63 but has missed some time since week ten. Wallace has been better the second half of the season allowing 71 in YAC, but that number ties for second most in the time frame. Maulet’s overall number has improved since week 10 (44), but was put in far less coverage situations since week 12 as the secondary got healthier. Bush’s playing time has decreased particularly last week, and ties for the second most yards allowed (71), but encouragingly limiting the opposition below ten yards in every game since week 12. Edmunds allowed roughly the same yards pre and post-bye (63), but allowing more YAC per target since the bye. Sutton has allowed slightly less since the bye (55), with excellent results considering his high number of targets, allowing over ten in YAC in just one game. Fitzpatrick has allowed more YAC since the bye (60), a strong in this facet overall in the time frame but allowing 22 last week.

So, the 2022 Steelers have fared the best in limiting opponents’ YAC, particularly since the bye week when they also improved on explosive passes allowed. Throughout the entirety of the season, the defense has struggled giving up some of the most average air yards in the league, with a common issue also being chunk plays of ten-plus yards. Here’s to hoping the Steelers close out the season strong as a pass defense in this passing league, with the article giving additional context to what we’ve witnessed this season, and pointing to the needed priority for improvements in my opinion moving forward.