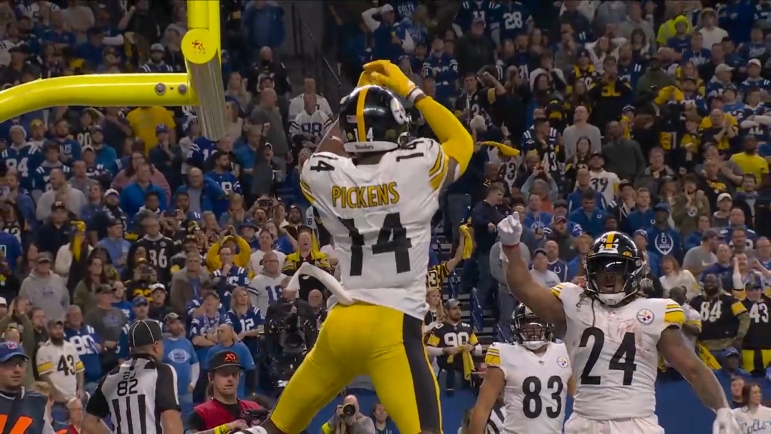 While this year has not been very kind to the Pittsburgh Steelers there still has been some good to come out of the season. That good, has been the Steelers rookie class, and in particular wide receiver George Pickens.

Former NFL scout Daniel Jeremiah wrote an article for NFL.com ranking his top 25 rookies this season as the season comes to a close. While the Steelers first round pick, quarterback Kenny Pickett, did not make the list, their second rounder, Pickens, did, landing at number ten.

“Pickens plays with passion, and he has put together an impressive highlight reel of grabs this fall,” Jeremiah wrote.

Pickens moved up six spots from Jeremiah’s last rating back on November 11. Since the 11th, Pickens has surpassed 50 yards in three of five games and has added both a receiving and rushing touchdown in that time frame as well. Before November 11th, Pickens only had one total touchdown and surpassed 50 yards only three times in eight games. In total, Pickens has 40 catches for 590 yards and two receiving touchdowns through thirteen games in his rookie season.

Pickens has still struggled to see targets at times, only seeing two in the win against Atlanta two weeks ago, and even last week despite a big game only saw three targets. On Sunday against the Baltimore Ravens he certainly made those targets count, catching all three passes for 78 yards.

Pickens has definitely been the Steelers’ best rookie this season, and has often helped his quarterback whether it was Mitch Trubisky or Kenny Pickett. He has been a big target on go routes helping an offense that has often struggled move down the field.

However, Pickens has not been perfect. A big aspect that he needs to work on is his route running to create more space for himself and more space for his quarterback to have a bigger window when throwing to him. While Pickens can catch almost anything, he can still make it easier for his quarterback by creating more operation. According to Next Gen Stats, Pickens generates some of the least amount of separation in the league, with only 2.4 yards of separation between him and the nearest defender.

Pickens will likely be a big time receiver for at least the next four years in Pittsburgh and will be a big help for Pickett. If both he and Pickett can continue to improve the Steelers may have their next great QB-WR combination.