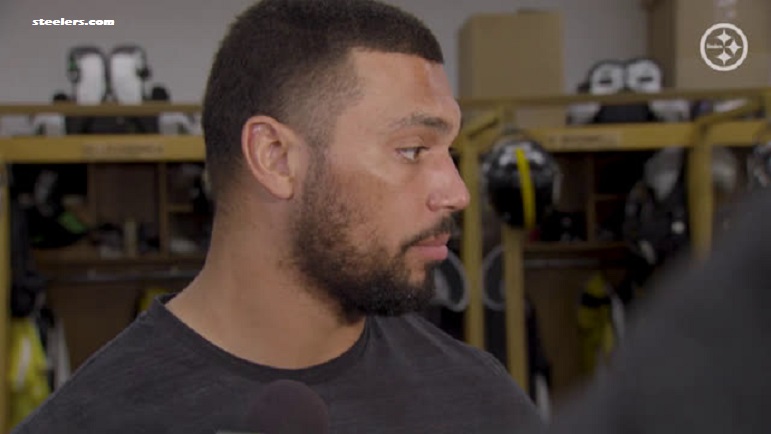 The Pittsburgh Steelers stacked wins together for the first time all season with the team beating the Indianapolis Colts on Monday Night Football in Week 12 before taking care of business against the Atlanta Falcons on Sunday. While Pittsburgh’s offense, and in particular its run game, has been a plus over the past two games, the Steelers defense has been strong, holding the Colts to 17 points and the Falcons to 16 points. Defensive lineman Chris Wormley talked to the media today about what the Steelers have been doing well defensively as of late.

“I think that’s the biggest thing when you look at the success of a defense is can you get off on third downs. Sometimes we’re really good at it, and sometimes we struggle at it. But I think our biggest thing is when they get those longer drives, let’s limit them to just three points, let’s limit them to field goals. And I think the last couple weeks we’ve done a good job with that. We’re always looking to stop on third down, but that really happens on first and second down. If we can give them third and long, that allows our rushers, Alex [Highsmith], T.J. [Watt] and Cam [Heyward] and those guys to really get after it, which is what we’re looking to do,” Wormley said via a video posted to the team’s website.

Pittsburgh has done a better job on third down each of the last two weeks, as the Colts were just 3-12 on third downs while Atlanta was 3-10. Against Indianapolis, the Steelers had the Colts in a few third-and-long situations, including a 3rd and 10 and 3rd and 14 and they were able to get off the field in both those opportunities. Pittsburgh put Atlanta in 3rd and 15 (which became 3rd and 20 after a penalty), 3rd and 13 (which resulted in a Cam Heyward sack followed by a 50-yard field goal), 3rd and 14, 3rd and 10 and a 3rd and 6 which became 3rd and 11 following a penalty. None of those third downs resulted in a conversion.

Wormley also mentioned Pittsburgh holding teams to field goals instead of touchdowns. The Steelers also allowed just one touchdown to the Falcons and two to the Colts. Atlanta made three field goals while the Colts made two, and the Steelers also forced a goal-line turnover against the Colts on a fumble by Jonathan Taylor (which Wormley recovered). Improved red zone defense is always a plus, and hopefully, it’s something Pittsburgh can continue to do well.

Wormley is right that getting to third and long happens on first and second downs. Pittsburgh’s run defense has been a strength each of the last two weeks, and not letting teams run the ball well on early downs has been a key to making sure they can get in those third and long situations. It’s something that Pittsburgh struggled with last year, but they’re a top-ten unit against the run this year and did a good job mostly shutting down a renowned run unit in the Atlanta Falcons.

One of the keys to that has been time of possession, as the Falcons were only able to run 17 first-half plays, of which six came via the run. By holding the ball and dominating time of possession, the Steelers are able to keep their defense refreshed, something Cameron Heyward praised yesterday. With Watt back, Pittsburgh’s pass rush is improved too, which opens up the door for him along with Highsmith and Heyward and guys like Larry Ogunjobi to pin their ears back and try to get after the quarterback on third downs.