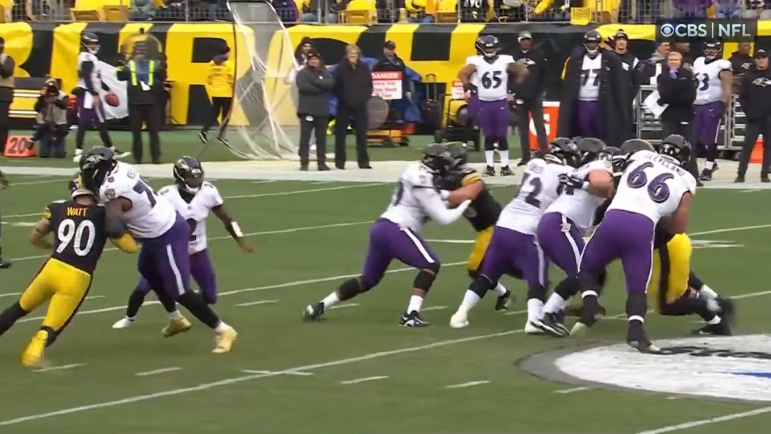 Two trains, one track, and it was quite clear which train won the battle Sunday inside Acrisure Stadium between the Baltimore Ravens and Pittsburgh Steelers.

That would be the Ravens’ run game, which rolled downhill time and time again throughout Sunday’s 16-14 win over the Steelers to the tune of 215 yards and a touchdown on 42 carries (5.1 yards per carry). In the war of attrition in the trenches, the Ravens dominated throughout the game.

Following the rather frustrating loss, Steelers head coach Mike Tomlin stated that he believed the Steelers were worn down by the Ravens falling forward consistently with the pile, which can take a toll on a defense, as shown by the performance of the black and gold down the stretch, especially in the fourth quarter.

“I just thought we wore down. The pile was falling forward,” Tomlin stated to reporters, according to video via the Steelers’ YouTube page.

Though T.J. Watt doesn’t feel that the Steelers were worn down defensively, Tomlin certainly believes they were, especially late in the game as the Ravens ran the ball at will and ultimately put the game away with a crucial 3rd and 3 conversion from Gus Edwards, sealing the win.

Late in the game, Baltimore ran the ball 14 times out of 20 plays with backup UDFA quarterback Anthony Brown in the game — not including kneel downs. At one point, the Ravens ran the football nine straight times, which resulted in a 30-yard Justin Tucker field goal to make it a 16-10 game and then later sealed the win with the game-clinching third-down conversion.

When a team can get going downhill like the Ravens were able to, it wears on a defense. That was the case for the Steelers on Sunday as they simply had no answer against Baltimore’s physical style, winning time and time again at the point of attack, outmuscling the Steelers in weighty situations, picking up a crucial win.

J.K. Dobbins and Edwards were terrific after contact. Dobbins, in his return from Injured Reserve, picked up 49 of his 120 yards on the day after contact, while Edwards added 49 of his 66 rushing yards after contact as well, according to Pro Football Focus.