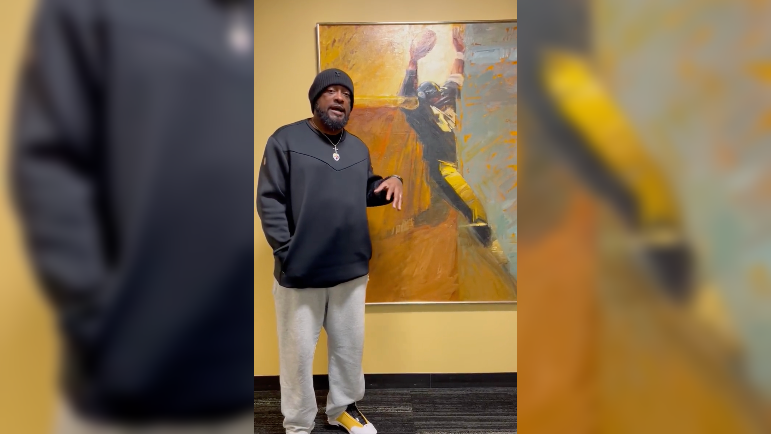 On this day 50 years ago, a single play changed the shape of not only a franchise, but Pro Football as it was known then.

Of course, the was the Immaculate Reception, authored by Pro Football Hall of Famer and Steelers great Franco Harris on Dec. 23, 1972 against the then-Oakland Raiders in the AFC playoffs at Three Rivers Stadium.

With 22 seconds left in the game and the Steelers trailing 7-6, quarterback Terry Bradshaw scrambled around and fired a strike downfield intended for Frenchy Fuqua that hit Raiders defensive back Jack Tatum first, bouncing all the way back to Harris, who caught the ball just before it hit the turf and raced home for the game-winning touchdown.

Now that it's December 23, it's officially the 50th anniversary of the Immaculate Reception.

As we mourn the passing of @steelers legend Franco Harris, we also celebrate his greatness and look back on how he remembered this historic moment. pic.twitter.com/LvM1QLHgy1

The 13-7 win gave the Steelers their first playoff win in franchise history and helped set the standard for the franchise moving forward as the organization went on to win four Super Bowls in the 70s and did quite a bit of winning from that day forward.

While today and Christmas Eve against the now-Las Vegas Raiders was supposed to be a joyous celebration of Harris, the Steelers legend shockingly died Wednesday at 72 years old, just days from having his number retired. It’s been a rough few days overall for the franchise, the players an the fan base globally, but that didn’t stop Steelers head coach Mike Tomlin from taking some time to reflect on the greatest play in NFL history Friday from in front of a painting of Harris raising his arms after scoring at the conclusion of the Immaculate Reception from inside the Steelers facility Friday morning.

The standard that is the Pittsburgh Steelers was born on the Immaculate Reception. pic.twitter.com/RhKIKb8644

“I wanted to talk a little bit about this gentleman right here, and the Immaculate Reception,” Tomlin said in a Twitter video pointing over his shoulder to the painting of Harris. “Over the years, I’ve had a lot of opportunities to spend time with him and get his perceptions on the significance of the play — and others. It’s just an honor to be in such close proximity to such a historic play, not only for this organization, but for football. And to hear those that were a part of that group, and to hear him tell it, what an awesome football play, man.

“It changed not only the tide of that game and of that season, allowing them to extend their playoff run, but more than anything it — from the mouths of those men — it changed their mentality here in Pittsburgh,” Tomlin added. “That mentality permeates and exists to this day. The expectation, the standard that is the Pittsburgh Steelers, was born on the Immaculate Reception. They expected to compete for, and win, World Championships moving forward. And we are so thankful that that standard has been set for us in the efforts of this man and his teammates.

“We try to honor them daily with our approach to business, and we’re just honored and thankful to be a part of that awesome fraternity.”

As Tomlin stated in his video posted to Twitter Friday, that play set the standard for the Steelers moving forward. It gave the franchise its first-ever playoff win in nearly 50 years of existence since its founding in 1933. Prior to that play and that playoff win, the Steelers are largely the laughing stocks of the NFL, recording just five winning seasons from 1933 to 1972.

All-22 view of the Immaculate Reception on the 50th Anniversary of it. #Steelers #NFL pic.twitter.com/FFLrYo1Y98

A fortunate bounce and a heads-up play by Harris — which was forged in college at Penn State under head coach Joe Paterno — changed the fortunes of the Steelers. While the Raiders, still to this day, believe that Fuqua touched the football first — which would have negated the play — it ended up changing things forever for the Steelers.

Though Pittsburgh ended up losing the AFC Championship Game the following week to the Miami Dolphins, who eventually went on to cap off an undefeated season two weeks later, the Immaculate Reception helped set the standard moving forward for the black and gold and forged the mentality that helped Pittsburgh win four Super Bowls in the 70s, becoming one of the greatest dynasties not only in NFL history, but professional sports as well.