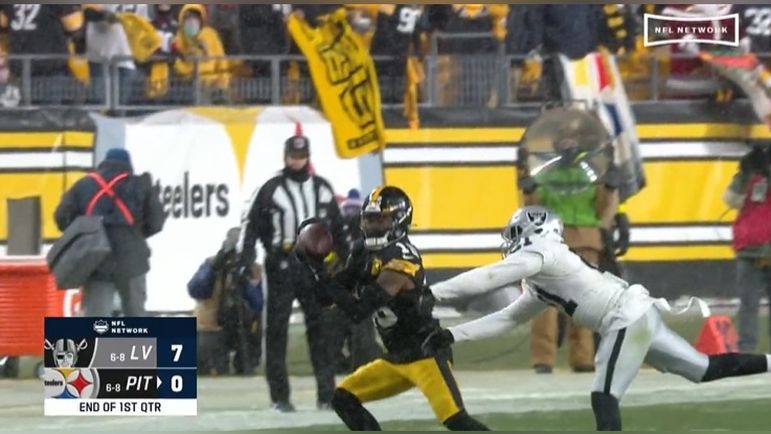 Football is a 60-minute sport—at least—but it often comes down to particular moments within the game that decide its trajectory. It’s the situations that Pittsburgh Steelers head coach Mike Tomlin would call the “weighty moments”, and area in which his team has run hot and cold this year.

But the trend has been generally positive, exemplified by their 5-2 record since the bye week. Their young guys delivered big in the weighty moments last week, with rookie quarterback Kenny Pickett finding rookie wide receiver George Pickens in the final minute for a game-winning touchdown.

Tomlin knew it would have to be a guy like Pickens to step up there for one simple reason: the Las Vegas Raiders weren’t going to let Diontae Johnson get past them the way he has been doing in recent weeks to other defenses.

“In that particular moment, we knew that they were gonna have two people on Diontae”, Tomlin said on Friday on the Mike Tomlin Show. “I think every weighty moment in the second half of that game, they had two people on Diontae. And so we knew the plays were gonna come from other people, and it did. GP ran a nice route, Kenny did a nice job holding that backside safety visually and putting the ball in a tight space”.

The last one put the Steelers on the Raiders’ 15-yard line but came up a yard shy of the first down on 3rd and 5. A quarterback sneak by Pickett gave them a fresh set of downs, and then he found Pickens on the next play for the winner.

Where was Johnson throughout that series? He was out there. He was just drawing the level of attention that Tomlin anticipated that he would. That doesn’t mean they couldn’t have gone to him. But the way it played out worked pretty well, so who is in position to complain?

Well, Johnson, perhaps, who is threatening to break the all-time NFL record for the most targets in a season without a touchdown reception. He would already have the record if the season ended today, but he has two more chances to find the end zone in order to avoid the infamy.

The fourth-year wide receiver set a career high with eight touchdown receptions just last season. This just isn’t an offense that is built right now to find the end zone through the air at a high volume. That needs to come in time, of course, as Pickett matures and grows more comfortable and the game slows down for him in the red zone as the field narrows.