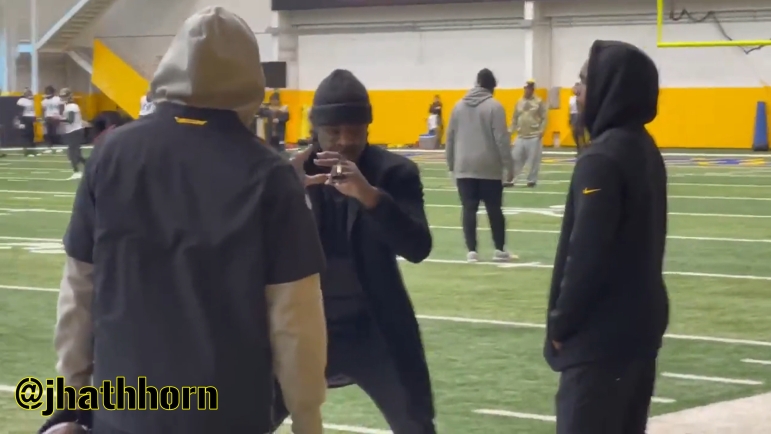 Great players never stop learning and growing. And they have no prejudices about the source of information as long as it’s good. But the greats who did what you’re doing before you did it tend to be a particularly handy resource to have at your disposal, the ‘been there, done that’ guys.

Hall of Famer Michael Irvin is one of them, and he was in Pittsburgh yesterday as the Steelers’ practice facility. Jeff Hathhorn of 93.7 The Fan grabbed the opportunity to capture a moment between wide receivers, with Irvin giving Diontae Johnson a quick crash course during a 13-second video he shared on Twitter.

Obviously, you can’t make out everything Irvin is saying, but if I were to venture a guess as to the particular subject at the time of the video, it was about securing the catch first while preparing to cut upfield.

Johnson has had some issues in the past with some of these post-route issues. While he has made some highlight-reel catches in his career to be certain, his greatest strength has always been between the snap and the pass. He gets open like just about nobody else in today’s game.

Even considering all the variables—major changes on offense, new quarterbacks, issues at coordinator, etc.—one would have to believe that a guy like Johnson who gets open so often and so effortlessly, as he should be putting up better numbers.

Obviously, some of that falls on him, and he’s definitely not without blame this year—even if his issues are frequently overblown, sometimes vastly so, by his detractors. He did have a drop earlier this year on third down where he failed to finish the catch as he looked to turn upfield to secure a third-down conversion. It would have been an easy play if he had only completed the most fundamental element—the catch.

Johnson went through extreme issues with drops back in his second season in 2020, leading the league in that category. He cleaned it up quite a bit since then, and he’s now well within the league averages, but it’s hard to let that go as a source of criticism.

It would be nice if a certain former Steelers wide receiver didn’t lose his mind and had a charitable bone or two in his body. I’m sure he could learn a thing or two about the craft from Antonio Brown. They’ve actually trained before, even though they were never teammates.