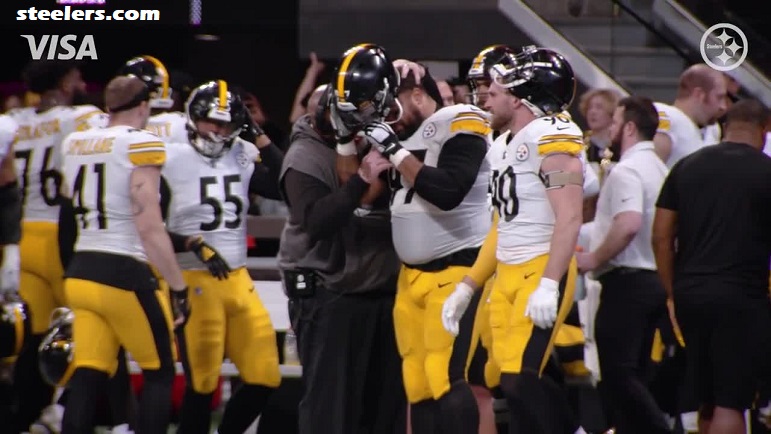 To the best of my knowledge, December 4 wasn’t necessarily a date of any particular note in the Heyward family. At least not before this past Sunday; they’ll probably remember it now. It turned out to be a very emotional afternoon for the clan playing in the area where they grew up after Craig “Ironhead” Heyward moved the family to Georgia while playing for the Atlanta Falcons.

His second-eldest, Cameron, was actually born in Pittsburgh, but he and the rest of the boys, including youngest Connor, grew up in Georgia, graduating from Peachtree Ridge High School. Sunday marked only the second time Cameron got to play in Atlanta since he was drafted in 2011. Obviously, this was the first for Connor.

It’s been well-documented by now that the brothers visited their father’s grave before Sunday’s game. Little did they know at that time how significant the day would prove to be. Not only did Cameron register a big sack, it also marked the first touchdown of Connor’s career—one that was very reminiscent of his father’s first receiving touchdown way back in 1991.

That story got plenty of legs lately thanks to Alex Kozora digging that up, so much so that it even got featured today on the NFL Network with a shoutout for Alex and our outlet. But while it was a cool little moment for us, it was huge for the family, as you can see in Cameron’s reaction to the play caught in the team’s latest Sights & Sounds video on their YouTube channel.

“The coolest story from the weekend came from the @Steelers , and the incredible weekend @CamHeyward and @ConnorHeyward1 had in Atlanta both on the field and off.” @pschrags pic.twitter.com/VWqGru0w1i

As you can see about five and a half minutes in, the raw emotion that came from big brother when he saw Connor make that great catch is evident and sincere, with all of the backdrop of the day and what the area means for the family.

Cam Heyward was really emotional after Connor Heyward caught his TD pass in Atlanta and the Steelers caught it on camera. #Steelers #NFL pic.twitter.com/zEjaFkQjWi

Cameron admitted after the game that he wasn’t necessarily emotionally prepared for that moment. Of course you don’t go in expecting that to happen. Rookie quarterback Kenny Pickett said that he told Connor before the game that they were going to get the win for his dad, but to put the score in right on top of that is next level.

I said this earlier in the week, but if the saying is that football is family, then the Heyward family is football. The game clearly means quite a bit to them, and for both athlete brothers to be able to play together in Pittsburgh where Craig played in college, and to have such a big day in Atlanta, that’s just a script that you can’t write.

It’s a game, sure, but this is also real life. That’s a real family out there having this wonderful but bittersweet moment, in real time. I’m happy that they got to share it with us. I really don’t have anything else to say beyond that.