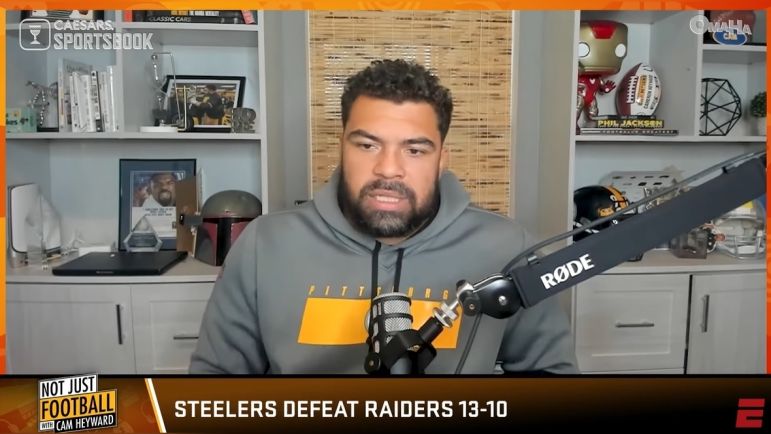 Last Saturday night, Christmas Eve, meant everything to Cam Heyward. The Pittsburgh Steelers needed a win to stay in the playoff race and more importantly, rightfully honor the late Franco Harris by earning a victory against the Las Vegas Raiders on the Immaculate Reception’s 50th-year anniversary.

On the latest episode of his Not Just Football podcast, Heyward said he vowed to do everything possible to win the game.

“Personally, I just thought I was not gonna lose this game,” Heyward said on his show. “There’s too much of that stuff going on. I vowed to myself we weren’t gonna lose.”

And Heyward sure played like it. In his best game of the season, one of the best of his career, he was unstoppable. He finished the day with seven tackles, three for a loss, with four pressures, two sacks, and a third-down pass deflection. There was one drive where Heyward made every single play. A tackle on first down, a sack on second down, a batted pass on third down. This morning, we shared a video breaking down Heyward’s best plays of the game.

For his efforts, he was named AFC Defensive Player of the Week for just the third time in his career and the first since 2017. Despite being one of the older defensive linemen in the league, Heyward has shown very little signs of slowing down with age. He’s up to 8.5 sacks on the season, a year removed from recording ten, and he’s now one of three defensive linemen in team history with 75+ sacks, joining legends L.C. Greenwood and Joe Greene.

Heyward said the atmosphere of Saturday night was remarkable.

“It was pretty special to be a part of. And then it being the 50th anniversary of these two teams meeting,” he said, referring to the Immaculate Reception.

From the very first snap, Heyward played like that game meant everything. Because it did. Personally and professionally, the Steelers had to win that game. And Heyward showed why he’s the leader, the team’s anchor, and the whole group follows him. He’ll need to keep setting that tone the rest of the year, starting Sunday night against the Baltimore Ravens.

Check out the entire podcast below.