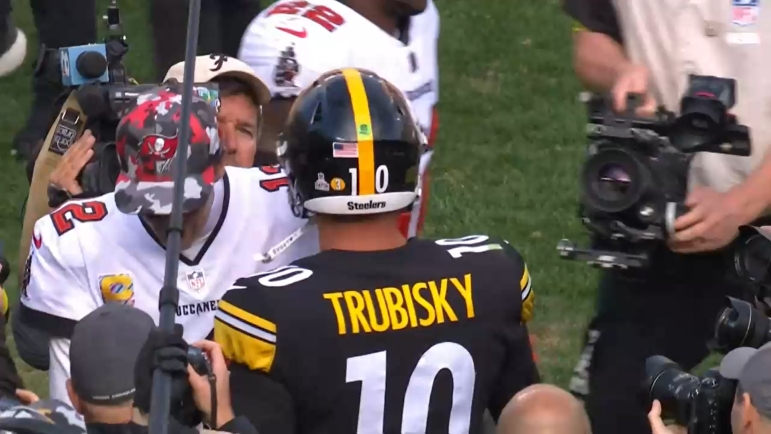 With starting quarterback Kenny Pickett currently in concussion protocol, it looks like Mitch Trubisky will be thrust back into the starting role this Sunday against the Carolina Panthers. While there is a competition going on this week between Trubisky and Mason Rudolph according to Rudolph, many analysts are viewing Trubisky as the starter.

One of those analysts is CBS Sports’ Cody Benjamin. Benjamin has a weekly quarterback power ranking, and with Pickett in the protocol, Trubisky is back on it and his ranking is not flattering. Re-entering the ranking after he took over for Pickett and tossed three interceptions in the Pittsburgh Steelers’ loss to the Baltimore Ravens, Trubisky is ranked 29th by Benjamin.

“Mason Rudolph could also be in play for the Steelers with Kenny Pickett battling a concussion,” wrote Benjamin. “Either way, Pittsburgh needs its run game and defense now more than ever. Mike Tomlin’s famous streak of non-losing seasons depends on it.”

Other than when he came in for an injured Pickett against the Tampa Bay Buccaneers, Trubisky has not been very good for the Steelers. In games, he started this year he went 1-3, with the offense struggling to move the ball with him at QB.

However, one aspect of the offense that has improved since Trubisky got benched has been the rushing attack. Since the bye week, the Steelers are averaging 142 rushing yards a game. In Trubisky’s four starts the team averaged 97.25 rushing yards per game. One big reason for the improvement has been the offense’s ability to sustain drives. Part of that was due to Pickett and the other part has been the improvement of the offensive line. The unit was still starting to mesh with each other at the beginning of the season and their chemistry was not great. Now, that chemistry has been much better leading to a much improved offensive line.

If Pickett cannot go on Sunday the Steelers must be able to commit to the run and not let their quarterback put the team in a bad situation. Trubisky’s three interceptions, all coming when the Steelers had good field position, cost them the game last Sunday. By allowing Najee Harris and Jaylen Warren to carry the football head coach Mike Tomlin can avoid Trubisky, or possibly Rudolph, from putting the team in a bad situation.

While playoff hopes are basically done, the team is still playing for pride. Tomlin won’t let this team roll over in the final games, especially this Sunday with the team still technically in the running for the playoffs. If a backup quarterback starts this Sunday expect a heavy dose of Harris and Warren to try and give Pittsburgh their sixth win of the season.