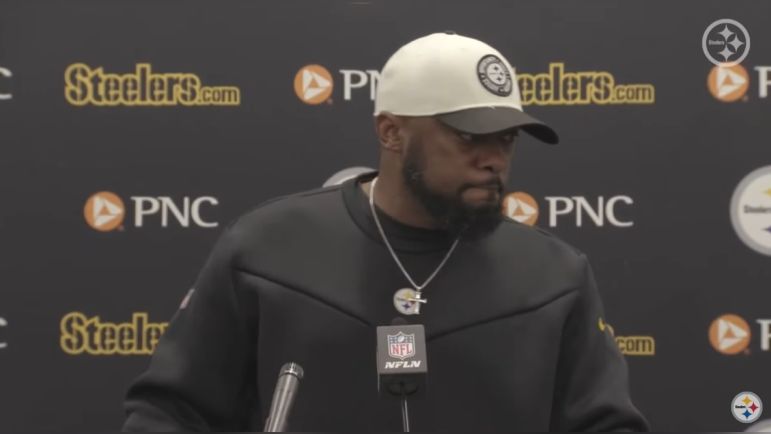 After starting the season 2-6 and looking rather dysfunctional overall, much of the conversation surrounding the Pittsburgh Steelers was the belief that longtime head coach Mike Tomlin’s famed non-losing seasons streak of 15 years was going to come to a crashing halt in the first year post-Ben Roethlisberger.

Now, the Steelers sit at 7-8 on the season after a thrilling 13-10 win over the Las Vegas Raiders on Christmas Eve. The conversation has shifted to the Steelers having a shot at a playoff berth in the AFC and now have a legitimate shot at extending Tomlin’s non-losing seasons streak to 16 seasons.

With the 7-8 record, the Steelers close out the regular season with two matchups against AFC North foes, hitting the road in Week 17 matchup in Baltimore against the Baltimore Ravens on Sunday Night Football before then hosting the Cleveland Browns in Week 18 at Acrisure Stadium.

For NFL.com columnist Jim Trotter, the Steelers and Tomlin will not finish with a losing season, thanks in part to the Steelers’ final two remaining games, he writes in his latest column for the flagship website.

“The closest that Tomlin came to a losing season in his first 15 years were the 2012 and 2013 seasons, when he had to win the season finale to finish .500. In both instances, the Steelers defeated the Browns to avoid a losing record,” Trotter writes for NFL.com. “At 7-8 this season, the Steelers need at least a win and a tie over their final two games to keep the streak alive. And after they play the Ravens in Baltimore this coming weekend — a game I expect Pittsburgh to win — guess who the finale will be against. Yep, the Browns.”

It’s all lining up very, very well for the black and gold under Tomlin.

Playing some of their better ball of the season, the Steelers have gone 5-2 since the Week 9 bye week, putting themselves in position to not only make the playoffs, but extend the non-losing seasons streak. Players have come out stating how important it is to them to not be the group that snaps the streak, and with the chance at the playoffs increasing each week, there’s plenty to play for.

The rematch against the Ravens will be pivotal for the Steelers. The last time the two teams met, the Steelers fell 16-14, thanks in large part due to three turnovers from backup quarterback Mitch Trubisky, as well as the defense’s inability to stop the Baltimore rushing attack.

Things should be different in Week 17 with rookie quarterback Kenny Pickett back in the fold and the run defense playing at a high level in the last two weeks.

Add in the fact that the Ravens are favorited entering the matchup and haven’t beat the Steelers as the favorites since 2019, it’s all lining up for Pittsburgh.

The Ravens are 3.5-point favorites against the Steelers on Sunday night.

Baltimore has lost its last three meetings against Pittsburgh when favored.

The last time Ravens beat the Steelers when favored was 2019 at Pittsburgh (26-23 win).

Should the Steelers take care of business in Week 17 against Baltimore, it will come down to Deshaun Watson and the Browns. Like Trotter points out, the last two times the Steelers came close to snapping Tomlin’s non-losing seasons streak, they staved it off by beating the Browns. That would be the chance for the Steelers once again in Week 18, if they get to that situation at 8-8.

Trotter certainly believes the Steeles won’t finish with a losing record, and it’s hard to disagree with them. They’re playing hard, have a shot at the playoffs and are going against familiar opponents. It’s lining up rather nicely for the black and gold.