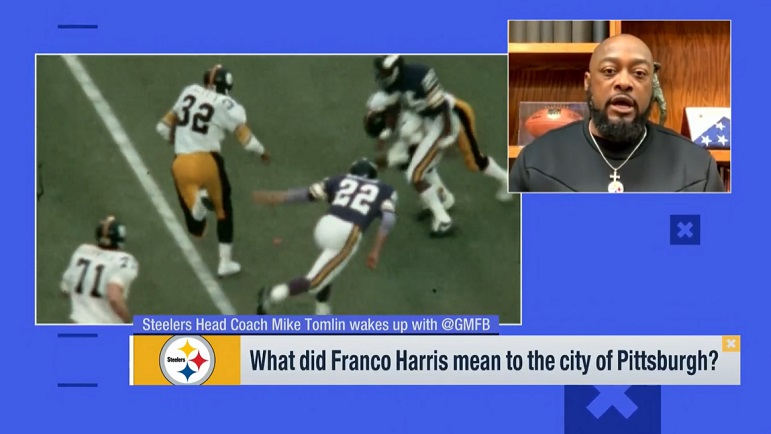 Throughout his 13 years as a Hall of Fame player for the Pittsburgh Steelers, which included the famous Immaculate Reception, star running back Franco Harris was the exact type of player on and off the field that the franchise needed, especial during tough times for the Steel City.

He was a shining example of the hard work, determination and overall commitment to his craft that the Steelers needed. That continued during his post-playing days in the city of Pittsburgh as Harris was consistently active in his adopted community, contributing his time, energy and money towards bettering the place he called home since becoming a first-round pick in the 1972 NFL Draft out of Penn State.

For Steelers longtime head coach Mike Tomlin, who appeared on NFL Network’s Good Morning Football Thursday, Harris was the blueprint of Steeles players and coaches that came after him when it came to how to utilize their platform within the city as a high-profile person.

What do you think when you think of the name Franco Harris?
@steelers Head Coach, Mike Tomlin, joins us at the breakfast table this morning@CoachTomlin | @JamieErdahl pic.twitter.com/vw6m1B4Kva

“He and my wife were probably closer than he and I. They were on board together for Pittsburgh Promise, that’s focused on the education of our young people in the city. They both served on that board for a number of years, and so it really gave us an opportunity to spend non-football moments, charitable moments together,” Tomlin stated to the Good Morning Football crew Thursday, according to video via NFL.com. “I just think that’s Franco for me. I think about those moments, man, where we are sitting at tables at events and utilizing our profile, if you will, to help others. He was just a blueprint for that for guys like me.

“Just every day of his existence, man, was a blueprint in terms of how to embrace the responsibility and the unique platforms that we have in this game.”

As professional athletes and coaches, especially in the NFL, that platform is immense. Harris was the shining example for how to not only represent the black and gold, but how to use his platform and his voice overall to better his community and impact it in a positive way overall.

That’s who Harris was for the last 50 years as a central figure for the black and gold. That’s what made him the beloved Franco in and around the community. As current and former players have said since his passing, Harris was the guy who led the way off the field, showing them how to be a Steeler on and off the field, upholding the Steeler tradition.

Now, sadly, he’s gone. But there is some comfort knowing that for the last 50 years he helped uphold that standard and passed on his knowledge and overall commitment to bettering his community. He’ll remain the blueprint for how to do that within the Steelers organization for a long, long time.

That impact might be greater than anything he did on the field.