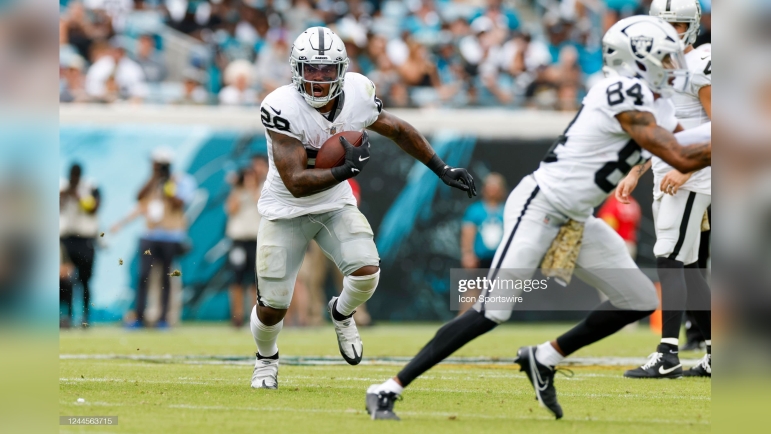 The Las Vegas Raiders may not be a run-first team, but don’t mistake that for thinking that they don’t recognize what they have in Josh Jacobs, who will likely cross 300 rushing attempts on the season today against the Pittsburgh Steelers. They are preparing to focus their efforts on eliminating him as a factor following six consecutive games with 20-plus rushing attempts.

“They play behind the wave that he provides”, Steelers head coach Mike Tomlin said of Jacobs earlier in the week via the team’s website. “The consistency he plays and they play in the run game is going to be a big-time challenge for us, particularly anticipating the weather circumstances”.

It’s expected to be about 14 degrees at kickoff but to feel like -1 with a 15-miles-per-hour westerly wind blowing. Though there should be some fog, it’s not currently expected to precipitate as of the time of this writing. But man, it’s gonna be cold, so bundle up if you’re braving the elements to attend.

But back to Jacobs, Tomlin described him as a “spectacular” running back. He’s got great pick-and-vision and patience, but he’s got very good leg drive and power once he hits it. His pile almost always falls forward. He wins DB confrontations. He wins linebacker confrontations. He’s got short-area burst. He can jump cut laterally. His lateral movement is excellent”.

But Tomlin wasn’t done with his effusive praise, saying that Jacobs was equally capable of running inside and outside, talking about how he took a joy as a lover of football in simply watching him during his preparation for the game.

A 2019 first-round draft pick out of Alabama, Jacobs was just named to his second Pro Bowl this year. He has 291 carries on the season to date for a league-leading 1495 yards with 11 rushing touchdowns, averaging 106.9 rushing yards per game. He also has 363 receiving yards on 46 receptions.

The Steelers have had some very good and very bad games against the run—even in back to back weeks. They were awful against the Baltimore Ravens two weeks ago and then excellent against the Carolina Panthers on Sunday. The week before the Ravens game, they had an excellent first half and a terrible second.

So which run defense will show up today? It feels unpredictable at this point. But one think they can’t possibly be lacking going into this game is motivation. If not just to keep their playoff hopes alive, they’re marking the 50th anniversary of the Immaculate Reception and honoring the life of Franco Harris. Let’s hope Najee Harris offers a more fitting homage than Jacobs does.