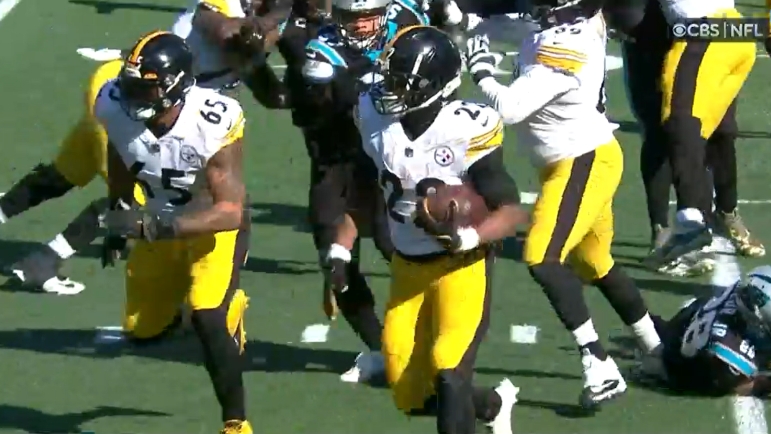 The Pittsburgh Steelers have a must-win game this Sunday night when they take on the Baltimore Ravens for the second time in less than a month. Their previous matchup ended in a tightly contested battle that saw the Steelers lose 16-14 in a game that was close throughout.

While turnovers and a poor run defense were the primary catalysts in what sunk the Steelers, there was another aspect that hurt the Steelers: their abandonment of the run. Although the Steelers were not lighting it up on the ground, they ran the ball decently in the first half, not including QB scramble runs, running it 12 times for 36 yards and a touchdown at a three-yards-per-carry clip. These are numbers that aren’t anything special, but the Ravens have one of the best run defenses in the league, allowing 3.5 yards per carry.

In the second half, Pittsburgh abandoned the run, handing the ball off only six times despite only trailing by one score for most of it. Although the Steelers only gained a measly 13 yards and 2.1 yards per carry, that does not justify avoiding the run, especially when backup quarterback Mitch Trubisky was not taking care of the ball all game.

Going into the Ravens’ game, Pittsburgh was coming off a game against the Atlanta Falcons where they ran for 154 yards and ran at a good 4.2 yards per carry average. Just because they were not getting similar production did not mean they should have gave up on the idea of running the ball. Trubisky had to replace Kenny Pickett and had not played in a game since October. With the game being close they should have tried to take some pressure off of him and let Najee Harris and Jaylen Warren pound the rock, something they were doing decently in the first half. Instead, he threw three interceptions, all coming when the Steelers had good field position.

Sunday night, Pittsburgh will be on the road in a loud and hostile M&T Bank Stadium during primetime. With communication likely to be an issue the Steelers need to learn from their mistakes in the last matchup try and let Harris and Warren handle the heavy lifting one offense. Even if it is not successful immediately offensive coordinator Matt Canada can not abandon the run.

If done successfully, running the football is also a great way to control the clock. The Steelers had a hard time stopping the Ravens’ potent run game and with the possibility of quarterback Lamar Jackson returning Sunday night, it will be important to keep the ball out of their hands. If Pittsburgh can run the ball and control the clock they should be able to limit the amount of time Jackson and the Ravens’ offense has on the field and time for them to get going.

However, most importantly is that by not abandoning the run in a close game limits the amount of turnovers. The Steelers lost last time these two faced off because they threw three interceptions. So far on the season Harris and Warren have combined for only two fumbles and one lost fumble. The odds of a turnover coming with the ball in one of their hands are much less than if the Steelers are trying to throw it against the Ravens who have 14 interceptions this year.

To beat Baltimore, Pittsburgh will have to take care of the football. And running the football opens up the passing game. As long as the game is close on Sunday night, the Steelers should make it an emphasis to run the ball, it could help them avoid a defeat that will end their playoff hopes.