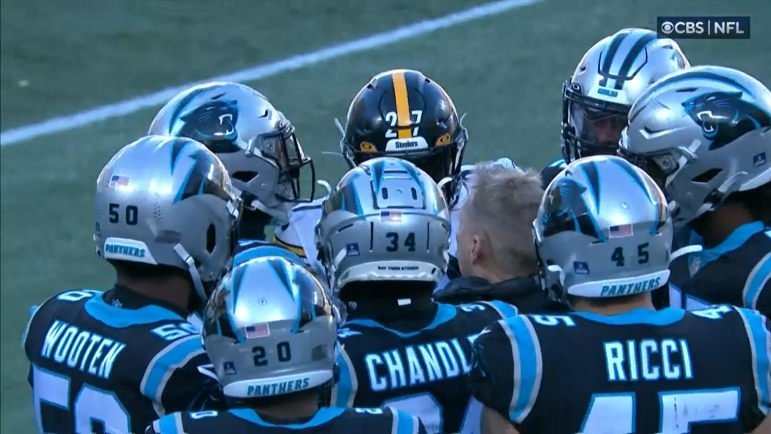 Three Pittsburgh Steelers were fined for penalties stemming from the team’s Week 15 win over the Carolina Panthers. The three were WR Diontae Johnson ($10,609), LB Marcus Allen ($10,609), and S Miles Killebrew ($8,431). That news was shared by the PPG’s Brian Batko a short time ago.

Steelers WR Diontae Johnson and LB Marcus Allen both were fined $10,609 each for their unsportsmanlike conduct penalties in last week's win against the Panthers, per a league source. Miles Killebrew was fined $8,431 for unnecessary roughness.

As Batko’s tweet notes, Johnson and Allen were fined for unsportsmanlike conduct penalties in the team while Killebrew was fined for unnecessary roughness.

Johnson was fined for taunting after a third-down catch in the second half of the game, backing the Steelers up from a goal-to-go situation to being at the Panthers’ 22.

Diontae Johnson has his gain reversed on a taunting foul, but gets the 1st & 10. More in our liveblog https://t.co/igYWVXv0K6 pic.twitter.com/jo9ppAXhxp

Fortunately, the Steelers still found the end zone, a Mitch Trubisky QB sneak to cap off a record 21-play drive. Johnson had a strong game otherwise, catching all ten of his targets for nearly 100 yards. On the year, he leads the team in receptions, though he’s still searching for his first touchdown.

Johnson, though, is clearly not happy.

Boy NFL really be trying get in ya pockets… SMH 😑

Allen had one of the most egregious penalties you’ll see a player commit this season. Following a Cam Heyward third down sack that seemingly got the Steelers’ defense off the field, Allen jogged over to the Panthers’ sideline and began to taunt the group, drawing a predictable flag. It gave the Panthers a new set of downs and their drive ended in a field goal instead of a punt.

Allen has been a core special teamer serving as the team’s upback on the punt team. He’s yet to play a defensive snap this season but has ten total tackles on special teams.

Killebrew’s penalty came at the start of the team’s 21-play drive, flagged for an illegal hit on the opening second-half kickoff that back Pittsburgh’s offense up to their nine. Primarily a special teamer, Killebrew has logged 13 defensive snaps this year and has three total tackles.

All NFL fines go to a charity of the league’s choosing. Fines are a predetermined amount outlined by the CBA that increase a certain percentage each season, leading to quirky fine numbers.