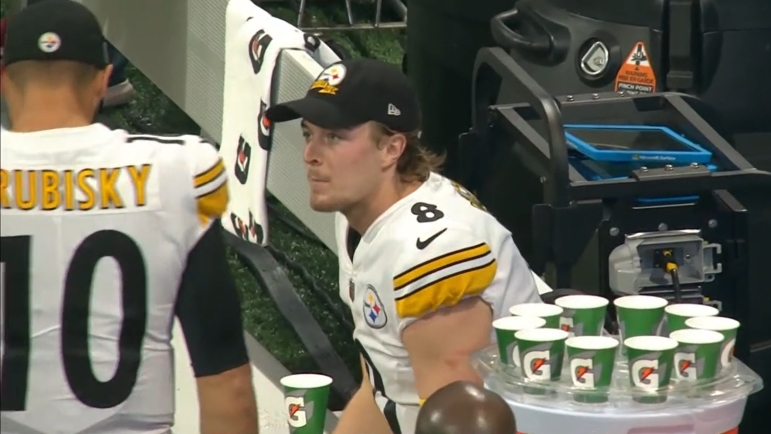 Pittsburgh Steelers rookie quarterback Kenny Pickett has done a good job commanding the offense in recent weeks, as he hasn’t had a turnover since Week 8 and has led the Steelers to a 3-1 record since their Week 9 bye. During The Mike Tomlin Show, head coach Mike Tomlin praised Pickett’s growth and ability to win on the road.

“I just think that the environment is becoming less and less a factor. And in order for that to happen, you gotta be in some hostile environments. You gotta be on the road. He had an opportunity to play in two consecutive road games and have some success, one in a Monday night road environment, and I just think that there’s growth associated with that. I think he’s more definitive in terms of how he expresses his opinion and shares information and what he’s seeing. I just think he gets continually more comfortable in-game and oftentimes that includes changes of environment, road venues, et cetera, et cetera. That’s no small task for a rookie quarterback to stack back-to-back road wins,” Tomlin said via the team’s YouTube channel.

Pickett’s leadership has never been in question. It’s something Alex Kozora wrote about last week, as his teammates have continually praised the way he carries himself and how he leads a huddle and leads his teammates. Even though Pickett hasn’t set the world on fire with his numbers, he’s been a steady presence and has played turnover-free football. He’s been content to let the Steelers win games by controlling the ball and with the run game, and he’s made the throws he’s had to move the chains and keep the offense rolling. He’s also slowly but surely getting more comfortable and more confident, which is what you want to see out of a rookie quarterback.

The next few weeks are going to be interesting for Pickett. He’ll have his first taste of the Steelers-Ravens rivalry tomorrow in the always-heated AFC North matchup, and with the Steelers sitting at 5-7, there’s a chance Pickett can guide them to a winning record, which seemed nearly impossible after a 2-6 start to the year.

Pickett’s also doing a good job of spreading the ball around, as he completed passes to nine different pass catchers last week. Even though it came at the expense of touches for George Pickens, it helped give defenses different looks and get more guys involved in the offense. Pickett’s ability to win on the road also speaks to his leadership, as he’s getting it done in unfamiliar environments. If he’s able to build off the two consecutive wins with an upset win back at Acrisure Stadium over the Baltimore Ravens, that will say a lot about Pickett and his development and ability to lead this team.

Obviously, you would like to see more of him in the passing game, but for now, what the Steelers and Pickett are doing is working. He’s managing the game and making the plays he needs to, as the Steelers run game and defense carry them. For a rookie quarterback, you want to see winning football and development, and right now, both of those things are happening with Pickett.