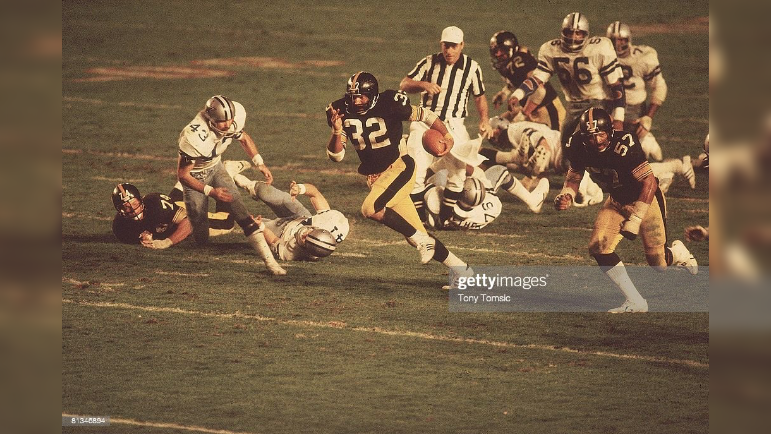 Terry Bradshaw and Franco Harris, forever linked together as not only Pittsburgh Steelers greats and authors of arguably the greatest play in NFL history — that being the Immaculate Reception — but also as friends.

Together, they formed quite a bond in their post-playing days, so it wasn’t surprising to see the former Steelers great appear on NFL Network’s Good Morning Football Wednesday to remember Harris, who died at 72 years old Wednesday, just two days before the 50th anniversary of the Immaculate Reception and three days before his jersey retirement ceremony at Acrisure Stadium against the Las Vegas Raiders.

Speaking on Good Morning Football Wednesday, Bradshaw recalled the “ultimate teammate” that was Harris, citing the 22-yard touchdown run in Super Bowl XIII against the Dallas Cowboys as the pinnacle of being that great teammate overall.

While Harris’ jaunt through the Cowboys defense on the perfectly-called play against the Dallas defense on that play stands out from the Steelers’ 35-31 win over the Cowboys in Super Bowl XIII, it was what Harris did in the huddle prior to the 22-yard touchdown run that will forever stand out to Bradshaw.

93 tackle trap. Franco Harris was so upset after Terry Bradshaw was sacked on the previous play that he demanded the ball and then ripped off this 22-yard touchdown. #Steelers https://t.co/PHM2f7Y3GX

A few plays prior, Bradshaw was sacked by Cowboys great Ted Henderson. Following the sack, the Cowboys seemed to celebrate over Bradshaw, which angered Harris.

According to Bradshaw, Harris demanded the football in that spot. A few plays later, Harris wound up in the end zone and the rest is history.

“When I got sacked against Dallas in Super Bowl 13, we got into the huddle and he said, ‘Brad’ — he called me Brad. Most folks call me TB. He called me Brad. He said, ‘Brad, uh, gimme the ball. Gimme the ball,'” Bradshaw said to the GMFB co-host panel Wednesday morning, according to video via NFL.com. “He was so mad at the sack and the way they acted over me. And I ran 93 tackle trap thinking I had a blitz, which was a perfect call because Cowboys showed blitz. Franco wanted the ball. This was perfect.

“And what happened was the safeties, Harrison and the Waters [Cliff Harris and Charlie Waters] had given me a false read, but I went on the quick count, and that’s when they ran into the umpire when he was on the other side of the ball. You know, they ran into him in front of Franco, who went 22 yards for the touchdown. So, I mean, that’s Franco though. He was the ultimate team guy. And ultimately you don’t see a lot of that anymore.”

The Cowboys defense parted like the Red Sea as the Steelers had the perfect call on for Harris on 93 tackle trap. He sprinted untouched through the heart of the Dallas defense into the end zone for the 22-yard touchdown, which gave the Steelers a 28-17 lead.

Dallas then fumbled on the ensuing kickoff and the Steelers struck again, this time as Bradshaw found wide receiver Lynn Swann for an 18-yard touchdown, making it 35-17, a score that would hold up in the end for the Steelers, who claimed their third Super Bowl of four in the 70s.