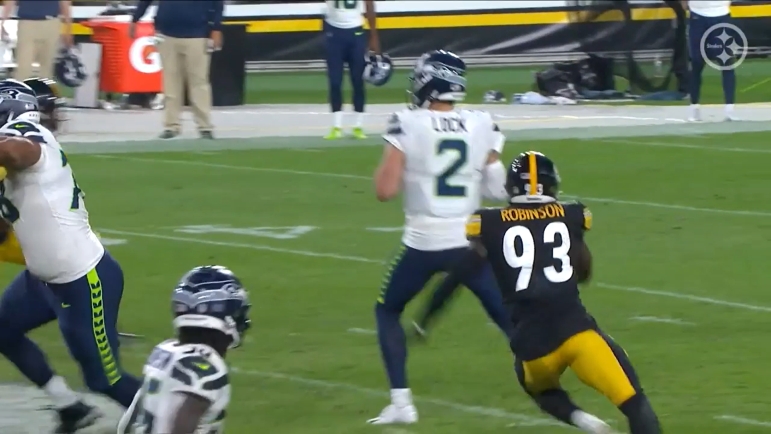 Pittsburgh Steelers linebacker and rookie seventh-round pick Mark Robinson was active for the third time on Sunday during Pittsburgh’s 24-16 Week 15 win over Carolina last Sunday, but it was the first game he was active where he logged defensive snaps. Robinson played seven snaps on defense, and while he didn’t log an official stat, he made an impact in the run game, attacking the ball and blowing plays up before his teammates finished them off. During his press conference today, defensive coordinator Teryl Austin talked about Robinson’s efforts on Sunday.

“That’s kind of how he plays though. I mean, that’s him. And it’s good. I think that he was excited to really get a hat, get in there and not just be a special teams guy and have an opportunity for some scrimmage, some defensive snaps. We like that. That’s one of the things we like about Mark Rob, he’s a contact player. We learned that, we saw that in camp. Again, he’s had his opportunity. He’s been grooming behind the scenes and working his tail off in practice. When he got his opportunity, I thought he reacted and did well,” Austin said via official transcript provided by the team.

Robinson was previously active against the Tampa Bay Buccaneers in Week 8 and the Indianapolis Colts in Week 12, but prior to Sunday, he had only logged five snaps, all coming on special teams against the Buccaneers. Robinson took full advantage of his first snaps on defense, as he played like a bull seeing red for the first time. It wasn’t a perfect defensive debut, and Robinson’s going to have to work on the coverage part of the position, but from the limited action Robinson saw, it seems as if the comparisons between him and former Steelers linebacker Vince Williams that were made in training camp and the preseason seem apt.

Right now, Robinson is behind Myles Jack (who missed Sunday’s game with an injury, opening the door for Robinson), Devin Bush and Robert Spillane on the inside linebacker depth chart. The odds of Robinson making much more of an impact this year aren’t high, assuming Jack, who logged a full practice today, is healthy and there are no other injuries in the room. But with Bush due to hit free agency this offseason and another offseason of development for Robinson, a converted running back, he could become a regular part of the Steelers linebacker rotation as soon as next season. It’s a position the team will look to add at either via free agency or the draft, but it seems they like what Robinson provides, and if he works on his craft there’s no reason why couldn’t be in the mix for playing time in 2023.

It was fun to see Robinson get his chance on Sunday, and Austin’s assessment that he’s a “contact player” is quite accurate. No matter the size of his opponent, Robinson wanted to go in and hit and make a play. With that attitude, his first official tackle will hit the record books soon enough.