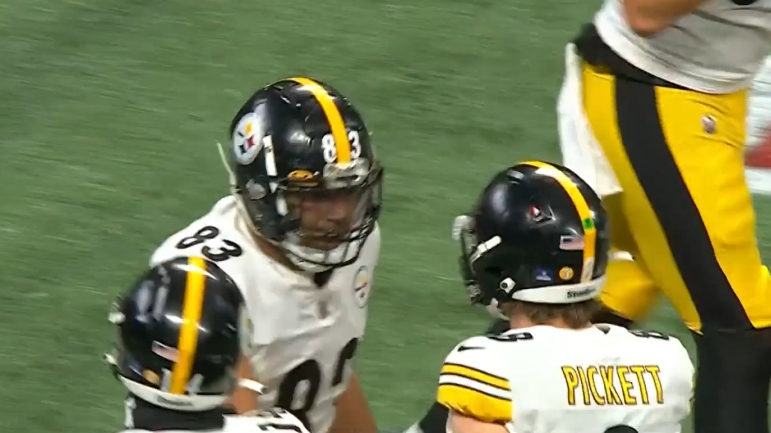 The Heywards’ story might not be for everybody, even including for some fans of the Pittsburgh Steelers. Believe it or not, there are some out there who couldn’t care less when it comes to hearing about that moment we all saw on Sunday. That’s okay. There’s no law saying fans have to be emotionally invested in the personalities on the team.

But it’s also a story that’s bigger than football and one that is easy to relate to on an abstract level. I’m talking of course about the significance of rookie tight end Connor Heyward’s first touchdown coming in Atlanta against the Falcons, where his father played, and near where he’s buried.

We’ve heard about this from a lot of different angles already, and even had the fortune to add to it a bit in bringing attention to the similarities between Connor’s first touchdown reception and that of his father’s three decades ago. One thing we hadn’t heard up until now, however, was what was said immediately afterward. We got to hear that from Connor yesterday.

Quarterback Kenny Pickett told reporters on Sunday after the game that he talked to Connor beforehand coming out of the tunnel and told him that they were going to win that game in honor of Craig Heyward. He didn’t mention this part, though. “After he threw [the touchdown] to me he was like, ‘That was for your dad’”, Connor Heyward told his other brother Cameron on his Not Just Football podcast.

Granted, that’s rookie to rookie there, but do you know what it honestly makes me think of? It makes me think of Ben Roethlisberger during his rookie season and going into his second and how he made that about getting Hall of Fame running back Jerome Bettis his ring.

It was leadership, and it was personability, a crucial intersection in sports. Just that little moment, letting the guy know that he understands what this means, that’s just a little something that you don’t see in games, on the practice field. The influence that kind of thing has can’t be quantified.

Now, truth be told, Pickett and Connor aren’t altogether strangers and not just because they went in the same draft class. Both have talked about this before, but they knew each other even back in college, Pickett relaying the story multiple times of how he tried hard to recruit Connor to join him at Pitt, where his dad played. Obviously it didn’t work out and he ended up at Michigan State, but that relationship was already there before the draft.

Yet it doesn’t strike me as something unique the rookie quarterback would do only in that moment for that person. It seems to be the kind of leader Pickett is in general. There’s hardly been a moment since he entered the pre-draft process that he hasn’t carried himself in a way that leads you to think, ‘This guy can get people to play for him’. He’s been doing that. The next step is continuing to turn that consistently into wins.