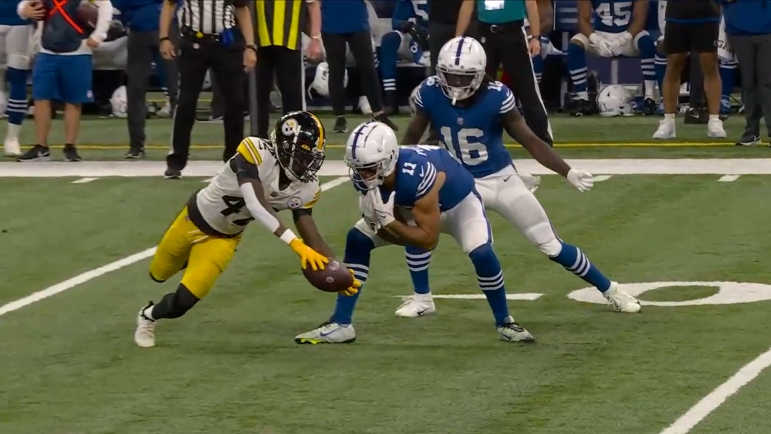 Pittsburgh Steelers cornerback James Pierre has expanded his role exponentially since the start of the season. After starting last season, Pierre was relegated to the bench midseason and didn’t regain a starting job until injuries thrust him into action in Week 5 against the Buffalo Bills. Since then, when given the opportunity Pierre has been one of the Steelers’ best cornerbacks, and against the Indianapolis Colts on Monday Night Football, he picked off quarterback Matt Ryan on the second snap of the game. Steelers defensive coordinator Teryl Austin offered praise for Pierre’s work ethic today.

“In terms of work ethic, he has a great ability to just keep pushing forward all the time. So even when he was struggling a little bit last year, as we all know, it didn’t affect him. It didn’t affect how he worked, how he prepared. When he got his opportunity again, he was able to take advantage of it. When he has played for us on defensive snaps, he’s done a pretty good job this year. I think that’s just a tribute to him and his work ethic and how he goes about his business. He might have had a bad day at the office, but that doesn’t change how he comes in and prepares every day,” Austin said via official transcript provided by the team.

Pierre, an undrafted free agent out of FAU in 2020, got the nod as a starting corner in Week 1 last season. But after a horrible game against Cincinnati in Week 11, he failed to log another defensive snap for the rest of the season after playing 85% of them against the Bengals. This year, Pierre didn’t play a defensive snap until Week 5 against Buffalo. He played regularly up until after the bye when he didn’t log a single defensive snap against the Saints or Bengals. But the Steelers switched up their cornerback groupings and kicked Cam Sutton into the nickel, which allowed Pierre an opportunity to slot in again as an outside corner against the Colts and he made the most of his opportunity with an interception and a pass deflection.

Pierre’s inconsistent playing time is a result of his struggles from last season, but Pierre came in this season prepared and has performed rather well when he’s played significant snaps. That speaks to his work ethic, as Austin said. Especially playing a position like cornerback, you have to have the memory of a goldfish and forget the play before and move on to the next one. Pierre embracing the work and preparing the same with the same work ethic no matter who he plays is exactly what you need out of a cornerback, and it’s probably one of the reasons why he’s performed so well this season.

Pierre will probably never be a top corner in the league, and his absolute ceiling is as a team’s number two cover corner. And right now, you could make the case that he’s the Steelers’ second or third-best cornerback. I’d probably put both Levi Wallace and Sutton ahead of him, but Pierre has proved his value this year. When he’s played, he’s usually played well. I’m excited to see more of what Pierre can do the rest of this year.