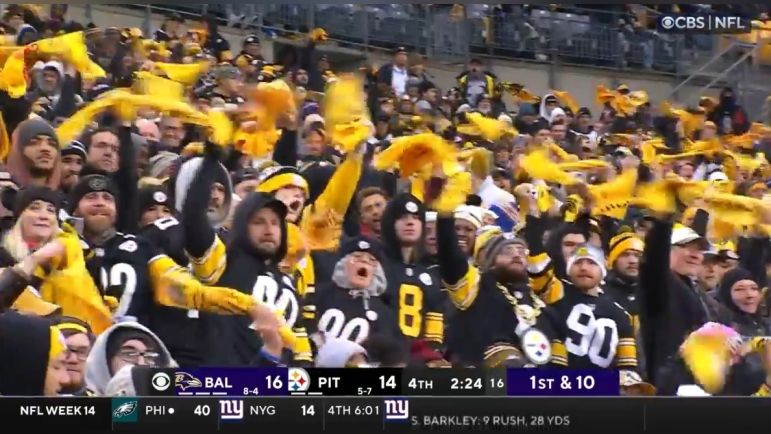 The Pittsburgh Steelers find themselves at 6-8 after defeating the Carolina Panthers on the road Sunday, cracking open the door for them to extend HC Mike Tomlin’s no losing season streak at least another week. While the Steelers were technically on the road, you wouldn’t have believed that was the case after seeing the sheer number of Terrible Towels and Black & Gold jerseys filling Bank of America Stadium on Sunday.

#Steelers Nation is undisputed. No other fan base takes over an opposing stadium quite like the Black and Gold! #HereWeGohttps://t.co/Pw4KniwdS4

Speaking to the media Monday, S Terrell Edmunds was asked about the number of Steelers fans that showed up to the Carolina game and the support that the fan based showed, Edmunds stated that there never really is a game where is feels like Pittsburgh has a disadvantage of the playing on the road thanks to their fan base.

“Yeah, every game is a home game,” Edmunds said to the media Monday in the locker room on video form Steelers.com. “It’s a close flight. We love our fans and we’re excited to see ‘em each and every week. We know that every game we can just feel comfortable out there knowing we’re going to have the support from everybody.”

This is so disrespectful lol I love it. https://t.co/bRbOxX7YD9

As I mentioned in my Tweet above, Steelers Nation is undisputed when it comes to taking over opponents’ stadiums. We have seen on numerous occasions where Steelers fans outnumber the home team fans by a vast number. The saying goes that Steelers Nation travels well, which is partly true thanks to several die-hard fans like David O. for Steelers Depot making regular trips to opponents’ fields. However, the reality is that the Pittsburgh Steelers have a nation-wide fan base that spans from coast-to-coast, thus leading many fans to come in droves when the team comes to their local area and overrun the home team’s facility.

It at least 80% Steelers fans here in Atlanta.

That might be generous to the Falcons too#HereWeGo #Steelers pic.twitter.com/9zX9OM3NYe

The Dallas Cowboys may hold the moniker “America’s Team”, but in reality, the Pittsburgh Steelers claim that title based on what we see every Sunday both at home and on the road. In fact, The Steelers were NFL Films first choice to be branded “America’s Team”, but Art Rooney didn’t want to be named a team for America when the team represents the city of Pittsburgh first and foremost.

Regardless if they accepted the nickname or not, the Pittsburgh Steelers have one of the most loyal, die-hard fan bases in all of professional sports. Last Sunday was yet another example of that as the fan base came out once again to make the Carolina Panthers feel like the road team as cheered on their beloved Steelers to another victory.