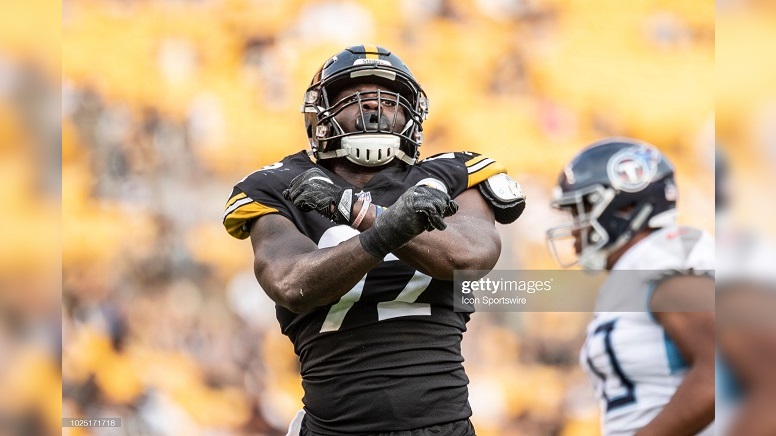 The Tennessee Titans released former Pittsburgh Steelers outside linebacker Ola Adeniyi earlier today, per a report from ESPN’s Adam Schefter. Adeniyi spent three years in Pittsburgh from 2018-2020 after signing with the Steelers as an undrafted free agent out of Toledo. Adeniyi signed with the Titans following the 2021 season and has been with the team ever since.

After registering two sacks in 16 games last season, Adeniyi battled injuries this season and has been active in just three games, including one start. He has just three total tackles this year in an outside linebacker room that also features former Steelers outside linebacker Bud Dupree, along with former Pitt Panther Rashad Weaver, who has stepped up for the Titans this season with five sacks. He lost his spot in Tennessee a week after the team signed former Colts, Jets, and Cowboys linebacker Tarrell Basham.

The Steelers have struggled with their depth at outside linebacker this year, bringing in both Ryan Anderson and David Anenih to compete as the team’s fourth outside linebacker, although neither guy made much of an impact before being waived. Behind T.J. Watt and Alex Highsmith, the Steelers have Malik Reed, who was inactive after dealing with a back injury for much of last week, and Jamir Jones. Due to Pittsburgh’s familiarity with Adeniyi, he’s somebody to watch to see if the team will look to make a move, especially with Reed banged up. The Steelers like to dress four healthy outside linebackers, so if Reed might miss more time there’s a chance the Steelers bring back a guy who knows their system in Adeniyi.

In addition to Adeniyi, the Titans also released inside linebacker Joe Schobert, who spent all of 2021 with the Steelers. That news was reported by Aaron Wilson of Pro Football Network. Schobert played in six games for the Titans, finishing with 16 tackles.

Adeniyi was a guy who seemed to be well-liked in Pittsburgh, and whether it’s with the Steelers or elsewhere, hopefully, he gets another shot soon.