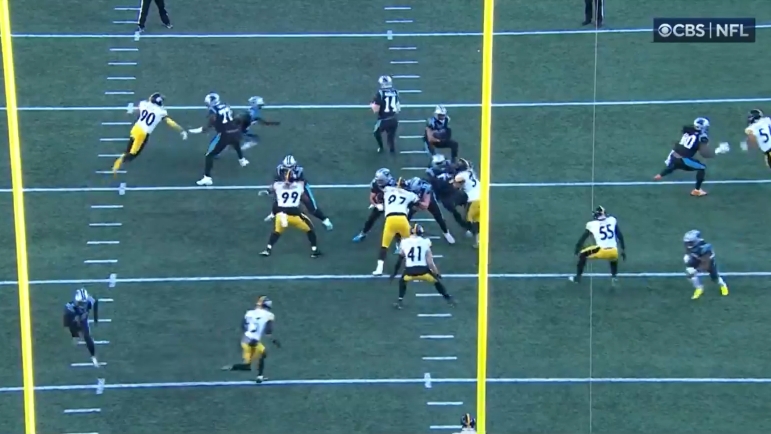 Pittsburgh Steelers strong safety Terrell Edmunds was robbed of his second sack of the season on Sunday because teammate T.J. Watt was flagged for being offside. He dislodged the ball from quarterback Sam Darnold’s grasp, though the Carolina Panthers were able to recover.

That wasn’t actually the play that got all of his teammates excited, though. The play in question came in the fourth quarter from the Steelers’ 10-yard line on 2nd and 8. He bowled over the left tackle on a blitz and nearly got another sack proper, but Darnold was able to get out of the pocket and throw it away. It was a visually impressive play, though.

“They were teed up. They were teed up on the field. When I came to the sideline everybody was teed up,” Edmunds told reporters yesterday about his teammates’ reaction, via the team’s website. “It’s just something that we’ve been working on. They just said we gotta bring the physicality. Little guys hitting, big men running. It was just an emphasis we’ve been talking about all year.”

The Steelers have been ramping up their safety (or defensive back) blitzes a bit, not just over the course of the season, but generally. It’s something they used to do more but had moved away from last year after Mike Hilton left in free agency.

As far as how it happened, well, all is not as it seems upon initial appearance. And that’s usually the case for plays that end up looking like this. As Josh Carney pointed out yesterday, the left guard got his right leg tied up with the center, which led to him tripping over when Edmunds bull-rushed him backward.

I hate to be the fun police here regarding the Terrell Edmunds/Ikem Ekwonu play from Sunday, but the Panthers' rookie LT was tripped on Edmunds' rush. Edmunds didn't really "pancake" him.

“Good leverage? Nah, not good leverage,” Edmunds conceded, with a smile. “It was a blitz, just had to keep on going. Just get there any way possible.”

He did manage that, and all credit to him for making the play and forcing an incompletion, which would eventually force the Panthers to settle for a field goal during a critical point of the game. A touchdown could have put them down by just three points (if they got a two-point conversion).

Edmunds did get a sack a few weeks ago in Indianapolis, and he does have four for his career, though it’s never been a specialty, exactly. The coaching staff played him in the box quite a bit on Sunday. Former teammate Vince Williams even said that they should just make him a dime backer already.