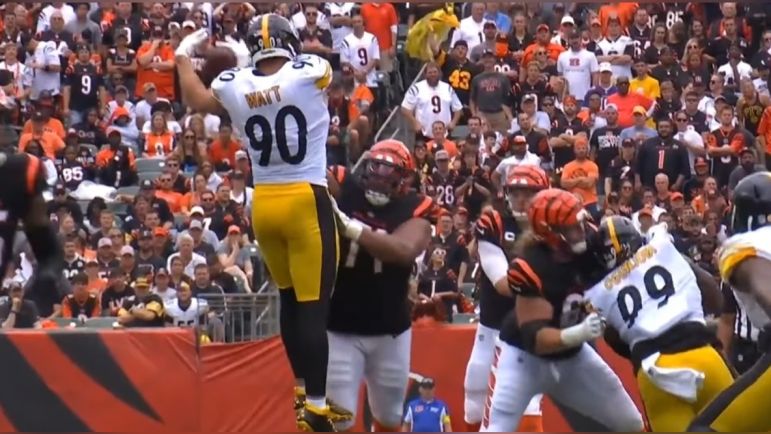 On Friday, OLB T.J. Watt spoke to the media in lead up to Pittsburgh’s game this coming Sunday against the Atlanta Falcons on the road and was asked about how he can affect the game outside of racking up sacks on the quarterback. Watt responded stating that his relentless effort to be a game wrecker leads to the opportunity to make splash plays in a variety of ways for the defense.

“I’m always going to try and be as aware as possible,” Watt said to the media Friday in the locker room on video from Chris Adamski’s Twitter page. “Try and affect the game any way I possibly can. So, if I can’t get there, I’m going to try and get into a throwing lane. Do whatever I can to punch out the football. And that’s just kind of the culture we’ve built here as a defense is that it doesn’t matter how the plays are made, it doesn’t matter who is making them, but we all have to try our best to create splash.”

When you watch Watt play, you see a man whose motor runs hot from snap to whistle. He gives his full effort on a snap-to-snap basis, regardless of if he is hunting the QB, chasing down the running back, or being asked to drop into coverage.

Watt’s ill-timed pec injury in Week 1 of the season ruined his chances of defending the crown of league leader in sacks from last season, tying Michael Strahan with 22.5 sacks in 2021 which earned him DPOY honors for the first time in his career. To date, Watt has appeared in four games and only has 1.5 sacks on the season, a far-cry from running the league last year where he averaged 1.5 sacks a game in 15 games played while missing time in a couple of those contests due to injury.

Still, Watt makes a great point that he finds a way to impact the game on defense even when he’s not taking the QB to the ground. He has tied his career high with two INTs this season, both coming against the Bengals on impressive batted ball attempts at the LOS where Watt somehow snagged the ball out of the air. He has four PBUs on the season to go along with the picks as well as a forced fumble last week against the Colts.

While Watt is well on his way to smashing Pittsburgh’s all-time sack record, he also has made quite the impact in other various categories during his time as a Steeler. He has a ridiculous 23 forced fumbles, seven fumble recoveries, 36 PBUs, and six INTs in six NFL seasons, speaking to his ability to impact the game a multitude of ways. His mere presence has also allowed the likes of Alex Highsmith to break out this season, taking the focus of opposing offenses as Highsmith has already surpassed 10 sacks.

T.J. Watt is the perfect leader for a defense that is striving to return to its dominant ways on the football field. Style points don’t matter in football, but splash plays do decide games. If the rest of the defense can follow Watt’s lead and try and be as opportunistic as their best player, the Steelers will have a chance to regain the same form on defense that they had several years ago in pursuit of a defense resembling the 2008 unit that went on to win Super Bowl XLIII.