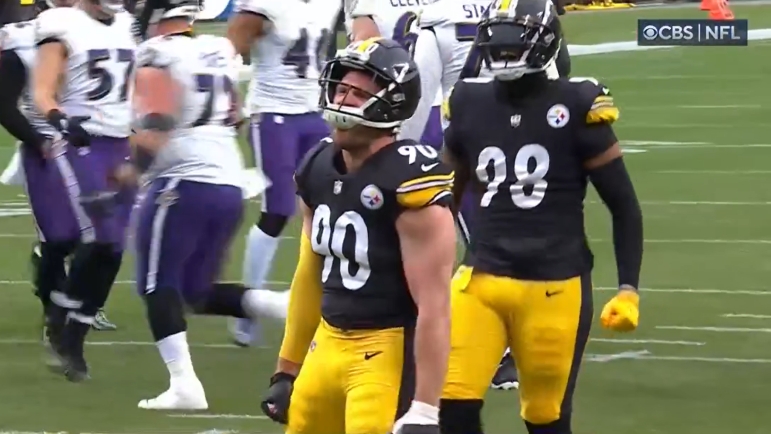 After suffering a torn pectoral in the Pittsburgh Steelers Week 1 win over the Cincinnati Bengals, Pittsburgh outside linebacker T.J. Watt landed on the injury report again shortly after his return with a rib injury. Watt wore something to protect his ribs in-game after sufffering the injury, but he said that the ribs are getting better and that he no longer wears the rib guard.

“They’re on the come up for sure. Not a hundred percent, but I feel a lot better and I’m getting better,” Watt said via a video posted to Steelers.com. The linebacker also said the rib protector was “too restrictive,” so he stopped wearing it, starting with the team’s Week 14 loss against the Baltimore Ravens.

He also reiterated that he didn’t want to miss time so he played through the injury rather than missing games. Obviously, a fully healthy Watt is a huge asset to the Steelers, as the reigning Defensive Player of the Year is one of the team’s most valuable pieces and his ability to get to the quarterback is something the Steelers need with their pass-rush looking rather lackluster at this point in the season.

Watt’s competitiveness is one of his best traits, and it’s good to see that he wants to compete and play rather than sitting out for an injury that appears manageable. If there was a further injury risk, Watt probably wouldn’t be playing at the advice of team doctors, so it’s really just a matter of pain tolerance, and Watt has shown that he can play through the injury.

It’s clear though that Watt hasn’t been the same dynamic playmaker he was last year for the Steelers’ defense, and I think a lot of that can be attributed to his injuries this year. He has 2.5 sacks in six games this year, and his only tackle for a loss since returning from his pectoral injury is a sack of Ravens quarterback Tyler Huntley last week. He did have an incredible interception in Pittsburgh’s Week 11 loss to the Cincinnati Bengals, which was his second interception at the line of scrimamge this season, with both coming against Cincinnati.

Hopefully, playing without the restrictiveness of the rib protector will allow Watt to return to his pre-injury form and he can rack up sacks. The fact he had a sack in his first game without it is definitely a positive sign, and hopefully, he can get to Carolina Panthers quarterback Sam Darnold at least once this weekend.