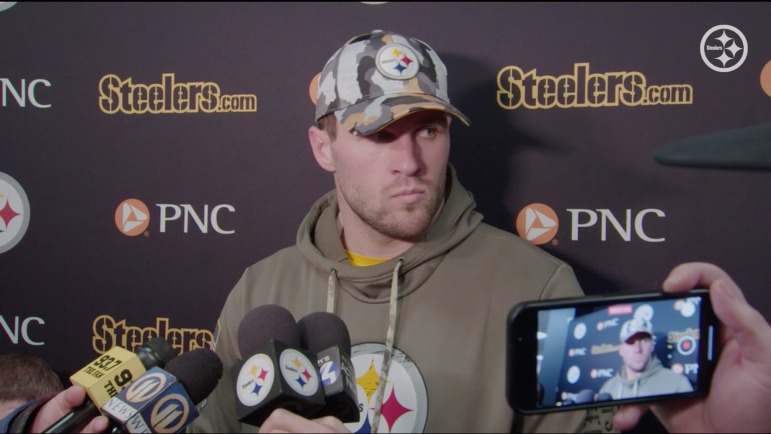 The Pittsburgh Steelers enter their Week 14 matchup with the run-heavy Baltimore Ravens coming off another matchup with a run-heavy team in the Atlanta Falcons. While both teams play the same style of football, Baltimore does a good job mixing up their looks and making things confusing for defenses on their run plays. Outside linebacker T.J. Watt talked about some of the challenges of defending the Ravens running game and how Pittsburgh can try to successfully stop it.

“They have some zone read stuff, obviously they saw some of the runs that got us a little bit last week so we might see some of those early in the game. But it’s a challenge. You don’t know who has the ball a lot of the time, it’s just very assignment-sound defensive football and just try to make the mesh point as messy as possible for them, try to make them turn it over,” Watt told the media today via Steelers.com

It’s going to be important for the Steelers’ defense to be quick off the ball to try and disrupt the Ravens at the mesh point (the point where the quarterback and running back come together). With Lamar Jackson out for Sunday with a knee injury, his backup Tyler Huntley will be under center. While Huntley is experienced, he’s not as experienced nor as talented as Jackson, and if Pittsburgh is able to disrupt the mesh point and force Huntley to make too quick of a decision, it could lead to a mistake and a turnover.

As Watt said, that’s a goal for the Steelers, and it’s something that he can do effectively given his ability to get in the backfield off the edge. It’s going to be an important game for Watt and fellow outside linebacker Alex Highsmith to try and disrupt plays in the backfield while also holding contain on the edge to not allow the Ravens to break something big in the outside.

It will also be important for the defensive line to control the line of scrimmage. If Baltimore can take what they want up the middle in the run game, the Steelers won’t have much of a chance. They have to hold the Ravens to short, 2-3 yard gains, especially on early downs, and force Huntley to throw the ball. Last week, the Steelers did a good job limiting the big play from Atlanta, as the Falcons only had two runs go for 10+ yards, but 14 of their 28 runs were for at least 5+ yards. Against Baltimore, the Steelers are going to have to try to limit that number to less than 10.

Pittsburgh’s run defense this year has been much-improved and is currently a top-ten unit after finishing dead last in the league last season. They have to keep up and build on that level of play in order to contain a Baltimore ground attack that’s third in the NFL in total yards and yards per game.