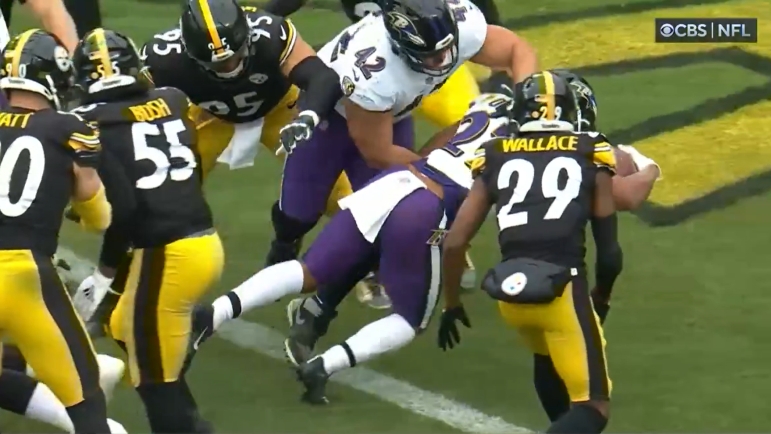 The last time the Pittsburgh Steelers faced the Baltimore Ravens did not go as planned, especially in the trenches. Indeed, the Steelers allowed 215 rush yards in their Week 14 loss in Acrisure Stadium. This time around, the Steelers will face their AFC North rival on the road, which begs the question of what they’ll do differently against the run. During a Friday press conference on Steelers.com, reigning DPOY T.J. Watt was asked about what the team will do differently against Baltimore.

“I think there’s some things schematically that are different,” Watt said when asked what the team will do differently against the Ravens. “Other than that, like I said, just getting guys hats on the ball, and making sure that we’re finishing tackles. I think that was a big point of emphasis just over the last couple weeks. Just making sure that we get as many hats on the ball, and when you get to the ball, get ’em down as quickly as possible.”

The loss to the Ravens put the Steelers well out of the playoff picture, and it is one they are still attempting to climb back from. Allowing 215 yards on the ground is bad enough. Allowing it to a clear run-first offense that played a backup quarterback in Brett Huntley, and an undrafted rookie in Anthony Brown at home is even worse. As Watt said, the team needs to improve their game plan and execution this time around.

After the Ravens’ loss, however, the Steelers have played extraordinarily well against the run. Indeed, they held the league’s leading rusher in Las Vegas Raiders’ Josh Jacobs to 44 yards. They also held the Panthers’ run offense, who had run for 223 yards the week prior to playing Pittsburgh and 320 yards after, to a mere 21 yards. According to RBSDM, the Steelers have allowed the lowest run success rate in the last two weeks, and the third-lowest EPA (expected points added) per run. As Watt stated, the team put emphasis on finishing tackles and getting to the ball, and it paid off in the last two games.

Simply put, for Watt and the defense, stopping the Ravens’ run game is all it will take to come away with a victory on Sunday. Granted, the Ravens’ rushing attack is consistently among the league’s best, and they’ve had little trouble running all over the Steelers’ defense in recent matchups. While it is easier said than done, the Steelers must find a way to slow down Baltimore’s run game, as their season may just depend on it.