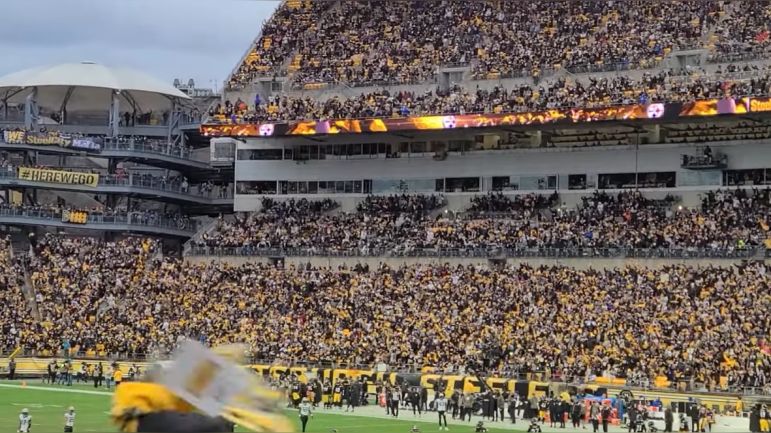 The Pittsburgh Steelers braved the frigid temperatures and pulled off the fourth quarter comeback Christmas Eve against the Las Vegas Raiders, winning by a final score of 13-10. The offense was stagnant for most of the football game, managing only two field goals until 2:55 left in the fourth quarter when Pittsburgh engineered a ten play, 76-yard drive which was capped off by a TD pass from QB Kenny Pickett to WR George Pickens.

The defense also came up big in this game, holding the Raiders offense to 201 total yards while picking up three sacks and three INTs against Derek Carr including the game-sealing pick by CB Cam Sutton in the final seconds of regulation.

What a way to end it in Pittsburgh.

OLB T.J. Watt was asked post-game about the fans that did show up to take on the elements during the holiday season to cheer on their hometown team, to which Watt responded that the sheer number of fans in Acrisure Stadium may not have been at max capacity, but their presence was definitely felt.

“Ya, and that’s the cool thing about Steeler Nation, man,” Watt said to the media Saturday night in the locker room on video from Josh Rowntree’s Twitter page. “It doesn’t matter if it’s terrible weather if it’s great weather. They’re always going to show up. Obviously, we knew it wasn’t going to be a full packed house with it being Christmas Eve and the weather, but the folks that were here were super loud and we appreciate it.”

TJ Watt. Big fan of Steeler Nation. No matter how many show up. #Steelers @937theFan pic.twitter.com/PSJp8JOPGs

With Saturday being the coldest game in decades and it being Christmas Eve, it was expected the Steelers wouldn’t have a sold-out crowd tonight against the Raiders. However, Watt couldn’t be more appreciative of the fans that were in attendance, showing their love and support for the team during a time when they needed it most. With Franco Harris passing away earlier this week and the team planning to retire his jersey and celebrate the 50th Anniversary of the Immaculate Reception this weekend, his loss right before the event hit the Steelers and the city of Pittsburgh hard in-lieu of losing a legend.

Steelers Nation was not going to let Harris nor the franchise down and came out to honor their local icon and cheer on their team to play in memory of him, managing to come back in the final minutes to secure victory. That’s what true fandom is all about. Braving the elements, even on Christmas Eve when it would have been so easy for many of those fans to stay at home and watch the game from their warm homes as they fill the stadium with sound in support of the Pittsburgh Steelers.

I have said it once and I’ll say it a hundred times more: the Pittsburgh Steelers have some of the most diehard fans in all professional sports. If anyone wants to dispute that statement, go back and watch the fans tonight as you will be hard-pressed to argue the passion the fan base has for the Black and Gold.