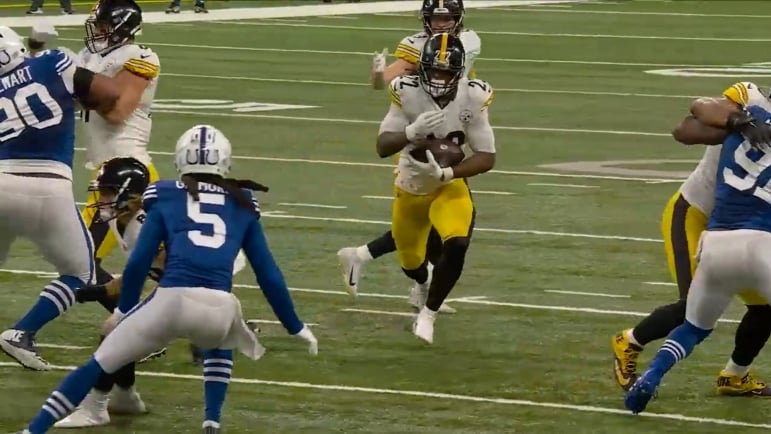 As we’ll do every week to get you ready for the upcoming game, our X-Factor of the week. Sometimes it’s a player, unit, concept, or scheme. Here’s our X-Factor for Sunday’s game against the Baltimore Ravens.

This one is obvious. As much a no-brainer as any X-Factor post as I’ll write this year. Sometimes I get cute and try to pick something hyper-specific or niche. Watch out for the Bengals Rocket Toss On 2rd and 3! The Jets’ backup QB has a hangnail – it could change the game!

Nuh-uh. Not here. This is run game, run game, run game. Whether or not the Steelers can keep the good times rolling or if they’ll be snuffed out by the Ravens’ top run defense. To their credit, Pittsburgh’s run game has come on strong. A more forgiving schedule has played a role but Pittsburgh ran well – without Najee Harris or Jaylen Warren – against the Indianapolis Colts’ then-2nd ranked run defense. Besides, I’m not looking to make any excuses. The Steelers have been a bad running team since 2019 so to have sustained success is encouraging regardless of opponent.

But as Harris said yesterday, the Ravens will be their toughest task. Their true litmus test. Baltimore is the best in the league with a stout front seven and athletic and physical secondary. Since acquiring LB Roquan Smith from Chicago, they’re allowing a league-lowest 2.6 yards per carry.

If Pittsburgh wants to keep their historic turnover-less streak going, turning four-in-a-row into five, they’re going to have the run the ball effectively, efficiently, and consistently. The Ravens have forced 20 turnovers this season, one of the top numbers in the league, and they may be getting back ball-hawking safety Marcus Williams, who picked off three passes in five games before injuring his wrist. A throw-heavy approach is not the way to win this game.

So can Pittsburgh control the point of attack? Can this interior offensive line win the line of scrimmage against the likes of Calais Campbell, Broderick Washington, or rookie Travis Jones. Kevin Dotson, James Daniels, and Mason Cole are going to have to continue to get a strong push and not force Harris and company to bounce, get horizontal, and change his path. That’ll doom the run game and doom this team.

The Steelers don’t have to run for two bills to win this game. But they can’t hit just 50 and expect to keep their winning streak going. If this run game wants to prove to the rest of the NFL how good it truly is, tomorrow’s the day to do it.