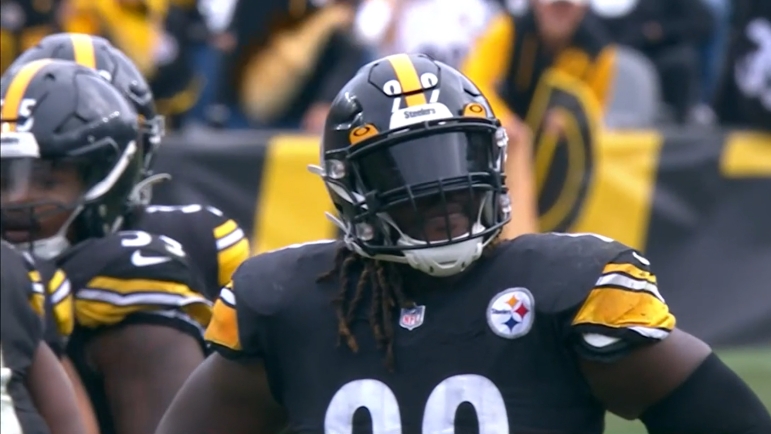 As we’ll do every week to get you ready for the upcoming game, our X-Factor of the week. Sometimes it’s a player, unit, concept, or scheme. Here’s our X-Factor for Sunday night’s game against the Baltimore Ravens.

We’ve been trench-heavy for several weeks with our X-Factors and that won’t change to close out the year. The Ravens won in Week 14 because of their ability to run the ball. They didn’t rack up the points, Pittsburgh stalled them out often enough, but they controlled the ball, the line of scrimmage, and the game. The Steelers, the whole stadium, knew the Ravens were going to run the ball, especially on their final drive, and Pittsburgh’s front seven couldn’t do anything to stop it.

Defending the run is an 11-man job. It takes more than than one man, there’s no question about that. But I want to center the run defense around Larry Ogunjobi. In potentially one of his final games as a Steeler, a free agent after the year, he’s played steady run defense the last two weeks. A departure from the Ravens’ game when he (and the rest of Pittsburgh’s front seven) terribly struggled.

He’ll have to play the way he has against the Carolina Panthers and Las Vegas Raiders. So what does that mean? A variety of things, getting off blocks, making tackles, not getting washed out against double-teams. But what he’s done especially well is on the backside of runs, preventing cutback lanes and forcing backs down the line while chasing hard and still making tackles. Earlier in the week, I tweeted a cut-up of Ogunjobi staying on his feet and impacting plays from the backside against the Panthers and the Raiders.

Larry Ogunjobi's done a really nice (and underrated) job on the backside of runs the last two weeks. Chasing the ball hard, not getting reached/cut off, staying on his feet, preventing cutback lanes, making tackles. Well done. #Steelers pic.twitter.com/EzaRmuyPiq

That’s the standard he has to be at. To be fair, he’s played through injuries this year to his lower body and that’s slowed him down literally and figuratively. One of his biggest issues is how inconsistent his get-off is. He’s so often late to fire off the football, allowing blockers to control and win blocks. He’ll need to be better this week.

If Ogunjobi can play well and if Cam Heyward can play well, the latter a far more reasonable and likely expectation, then odds are the Steelers’ run defense will have a good day. Or at least a better day. The Ravens will still get theirs, that’s their identity and they’re very good at running even when the defense knows what’s coming, but there’s a big difference between them going for 215 versus say…110.

Expect Pittsburgh to offer up different schematic wrinkles to fix their woes, the 4-4 defense with DeMarvin Leal and Mark Robinson, and not stemming their front which got them into trouble the first meeting (this is a road game and they only stem at home, anyway). But Ogunjobi has to play his best. If he does, that makes everyone’s lives easier around him and could propel the Steelers to victory.