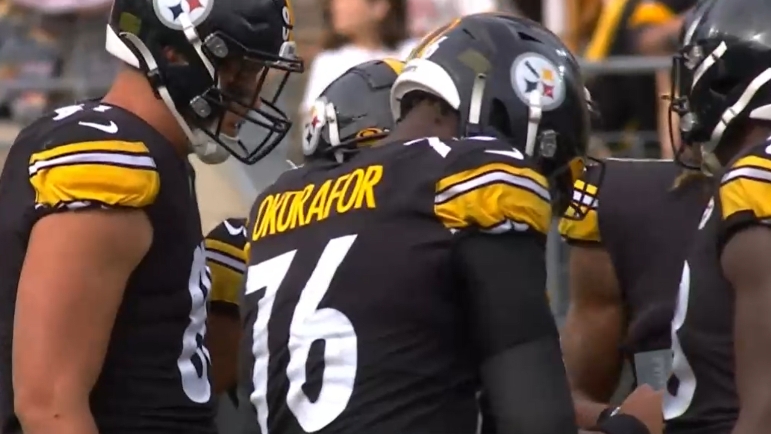 As we’ll do every week to get you ready for the upcoming game, our X-Factor of the week. Sometimes it’s a player, unit, concept, or scheme. Here’s our X-Factor for Saturday night’s game against the Las Vegas Raiders

Of course, emotions will be running high in this game just days after Franco Harris’ sudden and tragic death, the team still honoring him and retiring his jersey at halftime. That’s going to be a factor and intangible difficult to quantify or explain and there’s a balance between harnessing that emotion for something productive and not letting it consume you.

Here, I’ll be focusing on the X’s and O’s. Right tackle Chukwuma Okorafor isn’t a name we talk about much but he’ll play a vital role to beat the Raiders and keep the Steelers’ playoff hopes alive. Okorafor will most often see DE Maxx Crosby in this one. For Steelers fans not incredibly familiar with the name, think of Crosby as the Raiders’ version of T.J. Watt. A well-rounded player and top pass rusher, he has 11.5 sacks this season, nearly as many as the rest of Las Vegas’ defense has combined.

But Crosby isn’t a one-note player. He’s effective against the run and dominates tight ends and certainly gives tackles problems in the run game, too. Crosby is the team’s second-leading tackler with 78 of them. So Okorafor will need to consistently be at his best and not just third and long.

Now, Pittsburgh surely recognizes what Crosby can do and will do their best to slow him down. Hard to stop him but they can try to minimize. Tight ends and running backs will chip, the line will slide his way at every opportunity, and the Steelers may use their quick game more often as an easy counter. With potentially blustery winds, throwing deep probably isn’t wise anyway.

Still, there will be times when Okorafor is 1v1 with Crosby, a crafty and explosive pass rusher with a variety of ways to win. Okorafor is a fine right tackle, a bit above average in pass pro and a bit below average in the run game, but he’s generally been steady and solid this season. Frankly, you haven’t heard much of him, and that generally means a job well enough done. He’ll look for that non-conversation to continue through the holidays. If he can, the Steelers probably win and will have at least another week to keep their playoff aspirations alive.