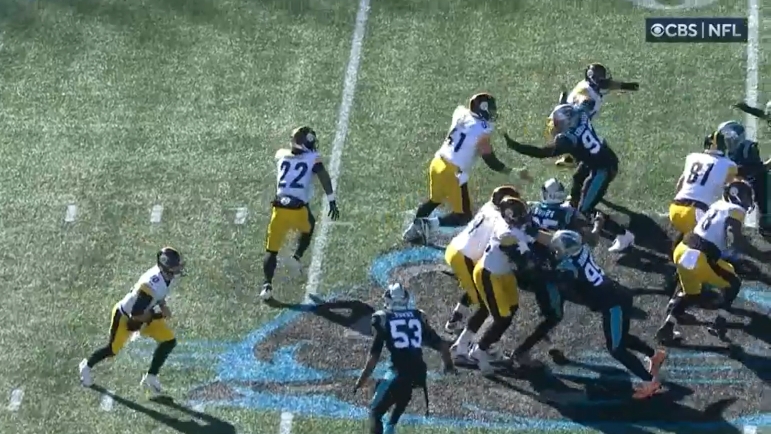 If it felt like the Pittsburgh Steelers ran the ball a lot in Sunday’s win over the Carolina Panthers, it’s because they did. In fact, they tied a Mike Tomlin-era record with 45 rushing attempts in the 24-16 victory. It wasn’t always pretty and the Steelers had to grind out a downhill run game but they stayed committed, stayed on schedule, and stayed within their plan.

Only once in Tomlin’s tenure as Steelers’ head coach had his team run the ball this much. They matched that 45-rush mark in a 2010 win over the Buffalo Bills but that game required overtime, making what they did Sunday a smidge more impressive. Since becoming head coach in 2007, here are the top five run-heavy games the Steelers have had.

Two of the top three run-heavy games under Tomlin have come over the past six contests, Sunday’s performance and the team’s Week Ten game against the New Orleans Saints. With Ben Roethlisberger’s retirement comes a changing of the guard, a shift from a pass-heavy approach with an offense that runs through its quarterback to a cloud of dust attack trying to keep its rookie quarterback, or in yesterday’s case, overly-aggressive prone Mitch Trubisky, from having to do too much.

Pittsburgh’s output against the Panthers wasn’t overly effective, rushing for just 156 yards and an average under 3.5 yards per tote. No Steelers’ back had a run longer than ten yards and only Steven Sims registered a big play, running off end on third and short down the right sideline as he continues to be a more useful runner than receiver. In fact, of the 140 games since 2007 in which a team ran the ball at least 45 times, the Steelers’ 156 yards rank 138th, only ahead of the 2022 Washington Commanders (152 yards) and 2011 Cleveland Browns (139 yards). Efficiency, thy name wasn’t Pittsburgh.

But the intent was for this offense was to avoid negative plays, mission accomplished, and to control the tone and tempo of the game. Of their 45 runs and excluding one kneeldown, Pittsburgh had just three negative runs and only two by running backs. Their gameplan was to slow the pace down, play physical, and win the war of attrition, something the Baltimore Ravens did to them the prior week. Najee Harris ran hard, falling forward and playing to his size, while Jaylen Warren picked up the first touchdown of his career, a reward for a long journey to the NFL.

Running 45 times every game isn’t realistic. But it’s the goal. There’s the obvious correlation, though not causation, between teams who can run the ball at will and those who win. Running that much means you’re controlling the clock, keeping the opposing offense off the field, and having the lead or playing in a competitive game. Those aforementioned 140 teams went 134-6 with 45+ carries. Pittsburgh played exactly to the style that want to be, a callback to a different era your grandpa grew up watching. Gritty, physical, wearing the opponent down to a nub and forcing them to take blow after blow before relenting.

The Steelers met that moment and for the foreseeable future, if and until Kenny Pickett becomes a Top-15 QB, the model won’t change.