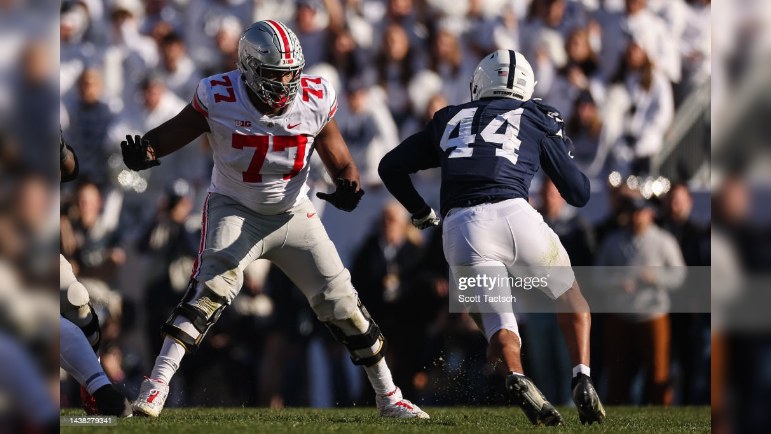 It’s been a rather lost season for the Pittsburgh Steelers, which has shown just how many holes the black and gold have on the roster currently under first-year General Manager Omar Khan.

Along with first-year assistant GM Andy Weidl and Director of Pro Scouting Sheldon White, the Steelers will have their work cut out for them in the offseason trying to patch up some of the holes and get back to being a contender soon rather than later.

ESPN senior writer Todd McShay, one of the top NFL Draft analysts out there, lent a helping hand Tuesday, dropping his first mock draft of the season for ESPN.com, pairing the Steelers with a potential franchise left tackle, helping the back and gold attempt to rebuild on the fly in the trenches while protecting prized rookie quarterback Kenny Pickett moving forward.

“Offensive line is the biggest need, and Johnson is an easy mover with quickness, power, improving technique and versatility to play multiple positions,” McShay writes regarding the mock selection of Johnson Jr. for the Steelers. “He settled in as the Buckeyes’ left tackle this season, allowing just one sack, and he would go a long way in helping protect Kenny Pickett. The Steelers didn’t use any draft picks on the line in April and have allowed 34 sacks this season (tied for ninth most). It’s time to get a cornerstone for this unit.”

Coming into the 2022 season, the Steelers invested rather heavily in the offensive line, signing right guard James Daniels and center Mason Cole to three-year deals early in free agency while also bringing in first-year offensive line coach Pat Meyer. Though the group has played well at times, issues remain as the Steelers have struggled to consistently run the football, protect Pickett, and avoid the drive-stalling pre- and post-snap penalties.

Ohio State LT Paris Johnson Jr (6'6" 311 pounds) still needs some technical work, but he has outstanding traits to be a franchise left tackle.

Dan Moore Jr. has been the heavy target of criticism as he’s had a rough second season. That leads to McShay’s mock selection of Johnson, who has played both tackle positions and right guard during his time at Ohio State.

He is comfortable moving all over the offensive line, though he profiles as a linchpin left tackle in the NFL thanks to his size and athleticism.

The Steelers have a history with Ohio State players, and getting a player of Johnson’s caliber would be a huge addition to the Steelers’ rebuild in the trenches moving forward.