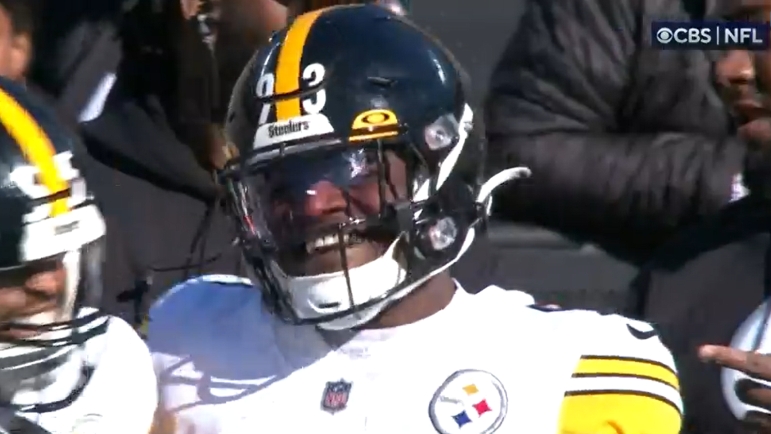 The Pittsburgh Steelers entered today’s game teetering on the brink, not just of a losing record, but of postseason elimination. Priorities have a tendency to shift, at least for some teams, based on what is at stake with the remainder of the season, focusing on development of young players when there are no postseason ambitions.

That’s not where the Steelers are, but with starting inside linebacker Myles Jack inactive today, they were able to get rookie Mark Robinson a helmet for the third time this season. And for the first time in his career, he saw time on defense.

He saw activity on Pittsburgh’s second defensive possession, getting some action on first downs in likely running situations. When the Carolina Panthers got into the red zone, he was plugged in as well after seeing his first snap on the opposite end of the field.

As mentioned, this is the third time Robinson has dressed for a game this year due to injury, but only the second time he has gotten on the field. He played five snaps on special teams against the Tampa Bay Buccaneers. He was also active against the Indianapolis Colts but did not even play on special teams.

A seventh-round pick out of Ole Miss, Robinson earned a roster spot on the 53 after proving his physicality throughout training camp and the preseason. The Steelers have been open about the fact that he is young and learning the position, but they believe he has what can’t be taught—starting with a love of hitting.

Steelers fans have been wanting to see the rookie get action throughout the year in the hopes that he can develop into some type of diamond in the rough. With Devin Bush and Robert Spillane both free agents next year, there is room for more at the second level of the defense.

Of course, it remains to be seen what approach the Steelers will take after this week, which could depend upon the result of today’s game. If they lose, they may be more receptive to getting the rookie playing time.

But in order for them to even consider dressing him regularly, they will have to trust his ability to play on special teams, because Jack will presumably be back next week and his inactivity is the reason that the rookie had the opportunity to dress today.

In the meantime, we will continue to look out for his usage throughout this game after getting a couple of snaps on the Panthers’ second drive—which just ended in a touchdown.