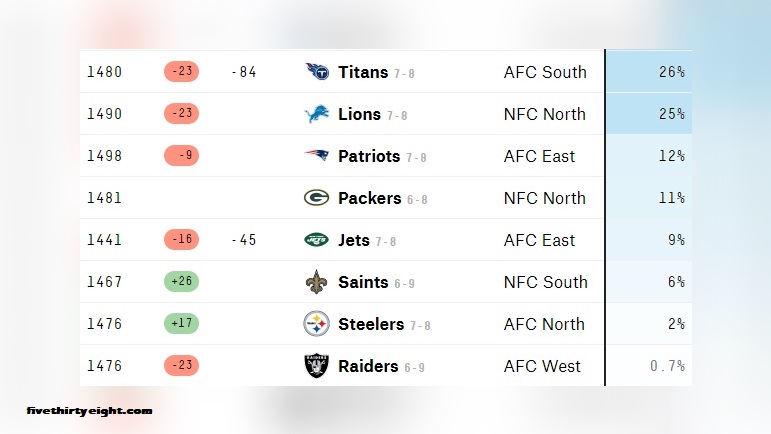 Saturday probably couldn’t have gone any better for the Pittsburgh Steelers.

For starters, the team delivered a much-needed win at home against the Las Vegas Raiders and on a freezing night that celebrated not only the 50th anniversary of the Immaculate Reception, but also the retirement of the No. 32 jersey, which was obviously worn by Hall of Fame running back Franco Harris, who sadly and suddenly passed away just a few days ago. There were several reasons for the Steelers to win Saturday night and they did just that.

For now, the Steelers win against the Raiders keeps the their faint playoff hopes alive. Those hopes grew on Saturday from 0.7% to 2.0% and that’s because the New England Patriots and Tennessee Titans both lost earlier in the day. Those two outcomes came on the heels of the Jacksonville Jaguars doing the Steelers a favor on Thursday night by beating the New York Jets. Prior to that Thursday night game, the Steelers had just a 0.2% chance of making the playoffs.

So, with all that transpired on Thursday and Saturday, what needs to happen in the remaining Week 16 games to allow the Steelers to remain in playoff contention in Week 17? It’s really quite simple. As long as the Miami Dolphins and Los Angeles Chargers both don’t win on Sunday and Monday, respectively, the Steelers will go into Week 17 still in playoff contention. The Dolphins play the Green Bay Packers at home on Sunday afternoon while the Chargers play the Indianapolis Colts on the road Monday night.

As of Saturday night, there are now five of seven playoff spots spoken for in the AFC and they belong to the Kansas City Chiefs, Buffalo Bills, Cincinnati Bengals, Baltimore Ravens, and whichever team wins the South division, which will be either the Titans or the Jaguars. The Chargers, however, can become the sixth team to clinch an AFC playoff spot on Monday night by beating the Colts.

The Steelers will now start preparing to play the Ravens next Sunday on the road. In the meantime, however, well sit and watch what all transpires on Sunday and Monday with the Dolphins and Chargers. At the very least, Christmas morning can be a celebration of the Steelers Saturday night win and them still being in playoff contention. It was so good to see them pull that game out late against the Raiders Saturday night.