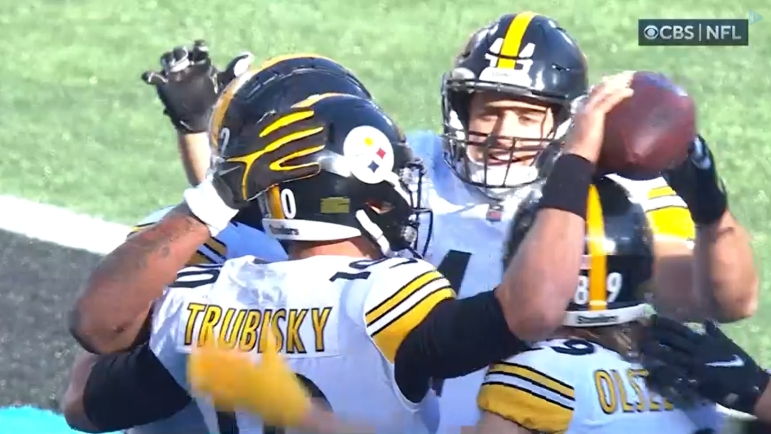 The 5-8 Pittsburgh Steelers were looking to avoid their first losing season in Mike Tomlin’s tenure when they matched up with the 5-8 Carolina Panthers at Bank of America Stadium in Charlotte, N.C. Behind a solid defensive effort and an offense that got going early, the Steelers were able to beat the Panthers 24-16 and move to 6-8.

Carolina started with possession, but the Steelers’ defense stepped up and forced a three-and-out. Johnny Hekker’s first punt went just 39 yards, and WR Steven Sims returned it five yards, so the Steelers started their first possession on their own 33-yard line.

The Steelers responded with a scoring drive. On 3rd and 6, QB Mitch Trubisky hit WR Diontae Johnson on a slant for a gain of eight and a first down, and two plays later RB Najee Harris picked up ten yards on a run to get Pittsburgh into Carolina territory at their 42-yard line. Harris gained eight yards which was good for another first down on 2nd and 7 two plays later, and then on 2nd and 6, Harris gained five yards to set up 3rd and 1, which Trubisky converted on a QB sneak. On the next play, RB Jaylen Warren caught a screen pass and picked up 11 yards and a first down, and Harris finished the drive off with a seven-yard rushing touchdown. Boswell’s extra point was good, and the Steelers took a 7-0 lead with 5:48 left in the first quarter

Carolina picked up a first down on the first play of their second drive when QB Sam Darnold found WR Terrace Marshall Jr. over the middle for a gain of 13. Back-to-back runs went for a net of -1 yards, but on 3rd and 11, Darnold hit WR D.J. Moore for a first down, and then went back to Moore for a 15-yard gain and another first down. The Steelers got the Panthers into another 3rd and long, but on 3rd and 13, Marshall Jr. was wide-open down the field and Darnold connected with him for a 40-yard gain. On 3rd and Goal, Darnold and Moore hooked up again, this time for a five-yard touchdown. Eddy Pineiro made the extra point, and Carolina tied the game at 7-7 with 14:12 in the first half.

The Steelers’ second drive started with three straight runs and a first down. On 3rd and 4 from the Pittsburgh 44, Trubisky went deep down the left sideline and WR George Pickens made a 38-yard reception at the Carolina 18. Three straight runs by Warren had the Steelers set up with 2nd and Goal at the 2, and Warren finished the drive off with a two-yard touchdown run, the first of his NFL career. Boswell’s extra point was successful, and the Steelers went up 14-7 with 8:20 left in the first half.

The Panthers went three-and-out on their next drive, and Hekker’s punt traveled 43 yards and was downed at the Pittsburgh 30. The Steelers followed up with a three-and-out of their own, and a sack by OLB T.J. Watt of Darnold on 3rd down led to Carolina’s second-straight three-and-out.

A reception by Pickens was good for 15 yards and a first down on the second play of Pittsburgh’s drive, but that would be the only first down the Steelers would get. P Pressley Harvin III’s punt was booted 43 yards and appeared to be downed by fullback Derek Watt at the Panthers’ one-yard line, but they ruled that CB James Pierre had his foot on the goal line when he deflected the ball back, making it a touchback. Carolina went three-and-out though, and with 53 seconds left they punted and it was downed inside the 10 at the Pittsburgh nine-yard line after a 63-yard punt. The Steelers just ran the clock out and went into the half up 14-7.

The Steelers began with possession in the 2nd half, and after a penalty for an illegal blindside block against S Miles Killebrew, the Steelers would begin their drive at their own nine-yard line. The Steelers picked up a first down on a 3rd and 1 run by Harris, and on 3rd and 10 a few plays later, Trubisky went to Johnson for 12 yards and a first. After a nine-yard Harris run on 2nd and 9, the Steelers ran a jet to Sims that picked up 22 yards to the Carolina 38. Johnson gained 18 yards down the left sideline a few plays later, and Johnson was able to pick up a first down on 3rd and 6 with an eight-yard reception. He was flagged for unsportsmanlike conduct after the play for taunting though, and the Pittsburgh offense backed up 15 yards and faced 1st and10 from the Carolina 22-yard line. Seven runs later, Pittsburgh was in the end zone when Trubisky capped off the drive with a QB Sneak for a one-yard touchdown run. Pittsburgh’s drive lasted 21 plays, went for 91 yards and took 11:43 off the clock.

Carolina hit a double explosive on their first drive of the second half when Darnold completed a pass to RB Chuba Hubbard, and his catch-and-run went for 45 yards. Pittsburgh looked like they were still able to keep Carolina off the scoreboard, as OLB Alex Highsmith and DL Cameron Heyward teamed up for back-to-back sacks that knocked Carolina back 18 yards and forced them to bring out the punt team. But during the break, LB Marcus Allen ran over to the Panthers’ sideline and started jawing and was flagged for unsportsmanlike conduct, giving Carolina 15 yards and a new set of downs. On 2nd and 5 from the Pittsburgh 29, Darnold threw to TE Tommy Tremble for a gain of 17 yards, but Pittsburgh would hold the Panthers to three, as Pineiro hit a 29-yard field goal to cut the Steelers lead to 21-10 with 11:52 left in the game.

The Steelers went three-and-out, as Trubisky was sacked on third down by LB Frankie Luvu. Harvin booted a 54-yard punt to the Carolina 27, which is where they took over. The Panthers quickly moved into Steelers territory, with a 13-yard completion to Moore and then a 24-yard completion to WR Shi Smith that moved Carolina to the Pittsburgh 24. A defensive pass interference penalty against CB Cameron Sutton gave the Panthers the ball at the Pittsburgh 4 with a 1st and Goal. The Steelers’ defense held firm and forced a field goal though, as Pineiro hit a 32-yard attempt to make the Steelers lead a one-score game at 21-13 with 6:15 left in the game.

A false start against Pickens on 3rd and 9 put the Steelers in a difficult 3rd and 14, but Johnson came through again on 3rd down, gaining 20 yards and giving the Steelers a new set of downs. On 3rd and 6 a few plays later, Johnson again picked up the first down, his 10th reception of the game going for nine yards. A Trubisky QB sneak before the two-minute warning gave the Steelers another first down, and coming out of the break the Steelers were looking at 2nd and 9 from the Carolina 36. On 2nd down, Harris ran for three yards, and on 3rd and 6, he was only able to pick up another yard. The Steelers brought out Boswell for a 50-yard try to essentially seal the game, and he made the field goal to put Pittsburgh up 24-13 with 1:04 left.

The Panthers got it into Steelers territory on a 3rd and 7 completion by Darnold to Moore for 26 yards. The Panthers spiked the ball and Pineiro hit a 52-yard field goal. Carolina tried an onside kick on the ensuing kickoff, and it was recovered by the Steelers. They knelt out the clock to clinch the victory.

With the win, the Steelers will return to Acrisure Stadium at 6-8 to take on the Las Vegas Raiders on Christmas Eve in a game that will celebrate the 50th anniversary of the Immaculate Reception.