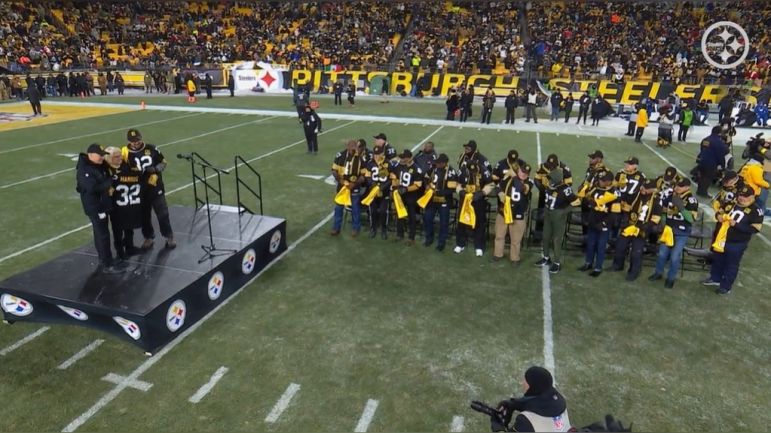 If you weren’t one of the thousands of Pittsburgh Steelers’ fans who braved the cold Saturday night, you were probably hoping to watch on TV the full Franco Harris ceremony as the Steelers retired his #32 days after his death. But those who thought the NFL Network would show the ceremony in its entirety were disappointed. Or at least half-disappointed.

The network only showed the first half of the ceremony, Team President Art Rooney II announcing the number retirement. But as the team prepared to show a video tribute to Harris’ life and legacy, NFL Network chose to run commercials instead. It left nothing but a sea of angry Steelers fans who thought the league and network should be able to watch the entire ceremony.

Here’s just a sampling of the unhappy response to the network’s decision.

NFL Network just cut to commercial in the middle of the Franco Harris tribute.
Pretty much sums up why I stopped watching football like I used too.

Class by @nflnetwork to cut away to commercial during Franco Harris' tribute video.
Advertised it all week to give him 30 seconds. Smh

Wow @NFL @nflnetwork – you promote Franco Harris and the Immaculate Reception all week, then when it comes down to the actual time to honor the man, you cut to commercial? Beyond embarrassing and a major slight to a man who deserved much better.

Mid sentence saying how great it was that the @nflnetwork was covering this halftime tribute they cut to a commercial. Awful.

That was the general sentiment across Steelers’ Nation. Harris’s death late Tuesday night made his jersey/number retirement all the more special and must-watch television. With many fans staying home due to it being Christmas Eve, not to mention the bitterly cold temperatures, and with so many Steelers fans out of market who couldn’t make it to the game even if they wanted to, watching the ceremony on TV was their only option. But NFL Network prioritized its advertisers and the almighty dollar instead of showing the full tribute to Harris.

But what’s done is done. So what if you’re a Steelers fan who still hasn’t watched the entire ceremony? You have some options. The network did at least show Rooney’s announcement but you can re-watch it below.

How about the video tribute? The Steelers did the smart thing and live-streamed it, capturing the moment even as NFL Network cut to commercial. It’s been archived and you can watch the full seven-minute ceremony, including the video tribute, by clicking the link here. For those who missed out, it is well worth your time. But you already knew that.

As frustrating as the NFL Network’s decision is, it isn’t a terribly surprising one. Cable companies chase ad revenue. That’s how they’re built. But thanks to technology in 2022 and some forward thinking by the Steelers, who were classy in every way they honored Harris’ death (unlike some franchises), the ceremony and tribute can be seen forever.