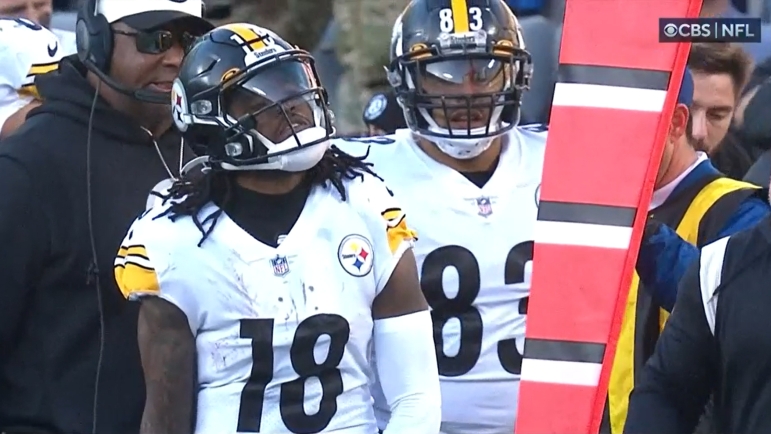 Needing a win to remain in the playoff picture and needing a serious response after being bullied the week prior by the Baltimore Ravens, the Pittsburgh Steelers rolled into Bank of America Stadium Sunday afternoon in Week 15 and bullied the Carolina Panthers in the trenches on the way to a convincing 24-16 win that wasn’t as close as the final score indicated.

After allowing 215 rushing yards to the Ravens last week, the Steelers allowed just 21 yards to the Panthers, dominating from start to finish, adding five sacks in the win over the Panthers.

Offensively, the Steelers came out and punched the Panthers in the mouth time and time again on Sunday, scoring on the first two drives of the game and then ripping off a 21-play, 91-yard drive that actually covered 106 yards due to penalties to open the second half. The Steelers took it to the Panthers and really imposed their will.

That performance earned the black and gold a “B” grade from CBS Sports Monday morning, which happened to be the fourth-highest grade from Sunday’s action from CBS Sports, behind the Cincinnati Bengals and Jacksonville Jaguars who earned “A” grades, and “B+” from the Denver Broncos.

“The Steelers’ defensive game plan here was to shut down the run and make Sam Darnold beat them, and that game plan worked like a charm. The defense limited the Panthers to just 21 yards on the ground and that opened the door for T.J. Watt and friends to tee off on Darnold,” CBS Sports writes regarding the Steelers’ grade. “The Steelers sacked him four times, with 1.5 of those coming from Watt and 1.5 coming from Cameron Heyward. The Steelers offense wasn’t flashy, but it was efficient with Mitchell Trubisky under center. The offense was able wear down the Panthers defense by converting 75% of their third downs, which was impressive for a team that went into the game converting just 40% of their third downs.

“The Steelers are now 6-8 and thanks to this win, they still have an outside chance at the playoffs and keeping alive Mike Tomlin’s 15-year streak of consecutive seasons at .500 or better.”

It was very clear what the Steelers wanted to do on Sunday on both sides of the football: stop the run and run the football at will. They did that quite well, winning consistently at the point of attack in the trenches. After stopping the run in the first half against the Panthers, it forced Carolina to be rather one-dimensional while trailing, which allowed the pass rushers to pin their ears back and get after Sam Darnold in the pocket.

The Steelers recording five sacks in the win was no accident.

Same with rushing for 156 yards and three touchdowns offensively. Head coach Mike Tomlin challenged the Steelers’ offensive line to be the more physical team and they did just that, controlling the line of scrimmage throughout the matchup.

That’s a good sign moving forward for the black and gold, though it would be nice to see that style of play more consistently on both sides of the football.