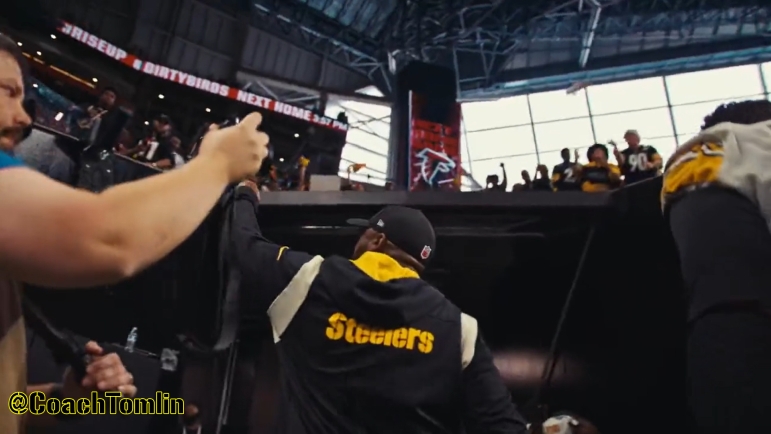 Whether it’s because they travel well, because they have a wide diaspora or some combination of the two, it’s been taken as a given for some time that the Pittsburgh Steelers have about the most consistent road presence among all teams in the National Football League.

Sunday’s win over the Falcons in Atlanta proved no different. While it wasn’t a complete stadium takeover as we have seen at other times such as a recent game on the West Coast against the Los Angeles Chargers, the Yinzer presence was palpable and recognized by the team after the game.

“Obviously I’m very comfortable at home, but being on the road here, it feels great to get two road wins and then we’re heading back home and playing in front of our great fanbase who [show] unbelievable support,” quarterback Kenny Pickett said after the game via the team’s website. “Every city we go to they come out strong, so definitely a huge shoutout to Steeler Nation. We appreciate them, and we give it our all for them every Sunday.”

There was even a point in the game where the pitch of the crowd raised to such a level of intensity that it appeared to have a role in forcing the Falcons into a pre-snap penalty, which says a lot for a team playing in its home stadium.

Admittedly, it must not be a great experience to be that home team. The Steelers have likely never in the modern era experienced anything quite like that, to have the opposing team get more cheers at home, whether Acrisure Stadium, Heinz Field or Three Rivers Stadium.

But consistent success over generations will buy that kind of loyalty, even if that loyalty has been tested for some in recent years. After all, head coach Mike Tomlin hasn’t brought this franchise even a postseason win since 2016. But plenty of fans still show love, as he acknowledged after the game.

Among the most omnipresent manifestations of Steeler Nation is the tight end catch chant. For years it was for Heath Miller. Now the monosyllabic drone is a low MUUUTH for second-year man Pat Freiermuth, who continues to have a strong season with another 75-plus-yard game.

Of course, he hears it as much as anybody. He told Ray Fittipaldo of the Pittsburgh Post-Gazette that if it weren’t for the presence of the Steelers fans in attendance at the game, they might only have been playing in front of the pigeons.

Pat Freiermuth said if not for the Steelers fans Mercedes-Benz Stadium would have been empty.

The Steelers are now 3-4 on the road this season and 2-3 at home. They are very much hoping to turn both of those columns into winning records by the end of the year. The only two remaining away games are at Baltimore and at Carolina, but they still host the Browns, Raiders, and Ravens.