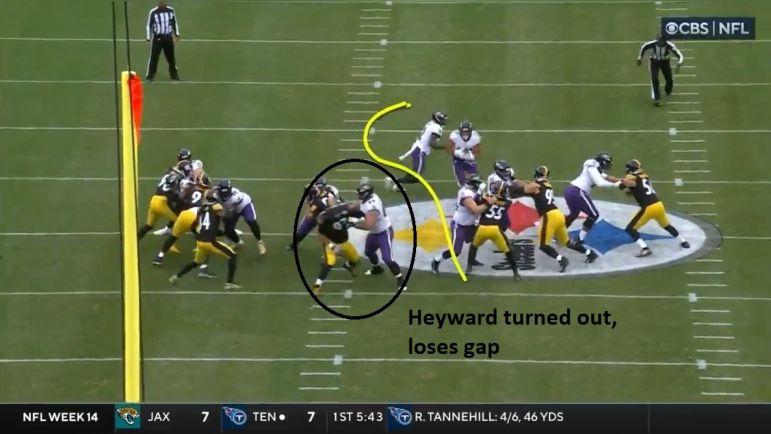 The last time the Pittsburgh Steelers met the Baltimore Ravens, running backs J.K Dobbins, Gus Edwards, and company combined for 215 yards as the Ravens ran all over the Steelers’ front. In Sunday night’s second act, Cam Heyward knows that can’t happen again. And he’s taking responsibility for a poor first outing, saying he has to do what the Steelers always preach. Do your job.

On the latest episode of his Not Just Football podcast, Heyward said he won’t make the mistakes he did the first time around.

“Stay in my damn gap,” Heyward told co-host Hayden Walsh. “I need to stop the freaking run. I need to stay in my gap and stop trying to do too much. Simple as that.”

Sometimes football is as, like Heyward said, as simple as that. Pittsburgh didn’t play fundamental football in their Week 14 loss to the Ravens, a game in which Baltimore racked up 215 yards on the ground despite not having Lamar Jackson, the team’s top rusher and one of the league’s biggest playmakers. The Steelers’ woes stemmed from a variety of issues but they didn’t play assignment sound.

As Heyward refers to, he got out of his gap on the Ravens’ longest run of the day, a 44-yard sprint by RB J.K. Dobbins. Heyward, in a rare snap at nose tackle, got out of his A gap and turned his back to the ball, allowing Dobbins to hit the hole and nearly score.

Cam Heyward doesn't like playing NT. He's admitted to it. But the Steelers had him log two snaps there against the Ravens, resulting in:

One of the many problems with the Steelers' run defense against the Ravens. #Steelershttps://t.co/1mBH0HkqWD pic.twitter.com/KLbh1Nvu0f

As bad as that game was, the Steelers have a great chance for redemption. The Ravens’ plan of attack won’t be any different this time around. Huntley figures to remain the team’s quarterback for this game while Baltimore will keep the ball on the ground and not put much on his plate.

Despite the Steelers’ overall success against Jackson, they’ve struggled to consistently contain the Ravens’ run game. Though Huntley isn’t the running threat Jackson is, he’s still a player the Steelers’ defense must account for in the run game, meaning they’re often playing with only 10 as opposed to all 11 guys.

But beyond the scheme and strategy, Pittsburgh must be more physical, tougher, and more gap-sound than they were in Week 14. Or else their result this time will also be a repeat performance: A loss. And this time, it comes with a guarantee that the Steelers’ season will end. The only thing worse than losing to Baltimore is having them end your season, too.