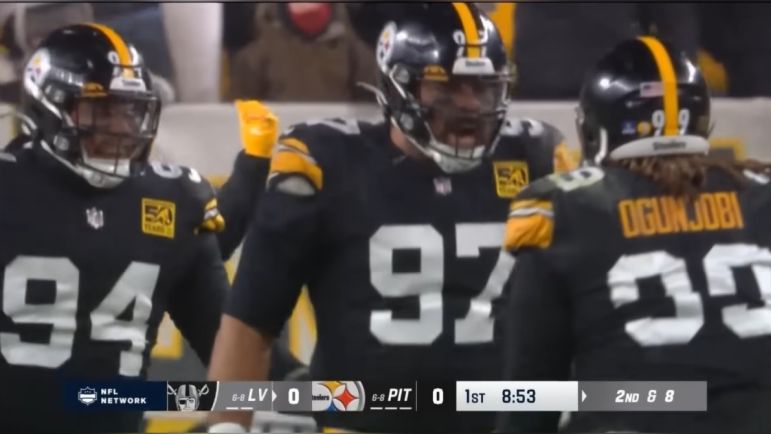 – 50 years ago, the Steelers scored 13 points to beat the Raiders, scoring the game-winning touchdown – their only of the night – with under a minute ago.

And 50 years later, they did the exact same thing. Insane.

– Alex Highsmith now has 12 sacks on the season, making him one of just five over the last 20 years to achieve that mark for the Steelers. The others? T.J. Watt, James Harrison, LaMarr Woodley, and Heyward. Pretty good company.

– Rookie Connor Heyward closed things out with a 21-yard rush, the first of his NFL career and the longest rush he’s had since November 24th, 2018, a 26-yard rush in a win over Rutgers. Saturday night was a little different animal.

– The Steelers/Raiders have five combined penalties last night. From 2017 to 2021, they didn’t play in any such games, five or fewer combined flags. But it’s happened to them twice since the bye week, the Colts and now the Raiders game.

– As you might suspect, good things happen when Cam Heyward records at least two sacks. The Steelers are 9-0-1 career when Heyward has 2+ sacks. The only “blemish’ is the 16-16 tie last year to the Detroit Lions.

– Since 1982, Heyward becomes one of just seven Steelers with ten career 2+ sack games.- The current leader is James Harrison with 17. T.J. Watt has 16.

– Minkah Fitzpatrick has five INTs this year, tying a career-high set in 2019 in his first season with the Steelers. In this century, the only players with multiple 5+ INT seasons are Troy Polamalu, Fitzpatrick, and…you guessed it, CB Chad Scott.

– Raiders RB Josh Jacobs averaged just 2.9 YPC, his worst mark of the season. Davante Adams’ 15 yards were his third-fewest of the year, too. Pittsburgh shut down Las Vegas’ stars.

– Najee Harris’ nine targets tonight were a season-high and the second most of his career only behind his record 19-target game against the Bengals last season.