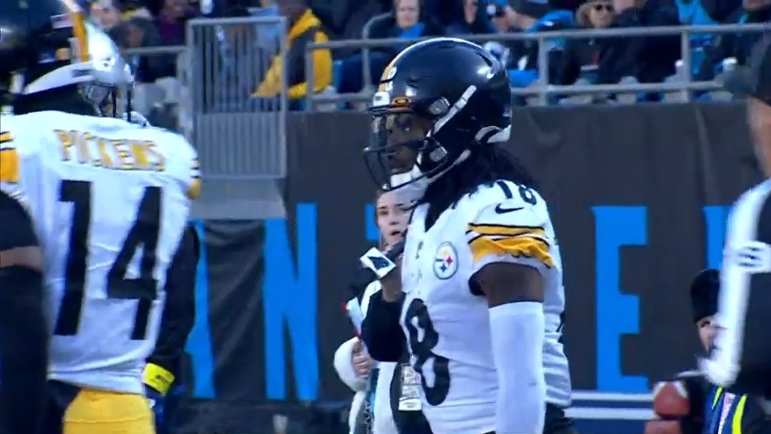 Gifting you some weird this holiday season.

– The Steelers ran the ball a whopping 45 times in Sunday’s win over the Carolina Panthers. To avoid Mike Tomlin’s first losing season, it ties the highest number of rushing attempts in the Tomlin era, 2007 to present, and the most Pittsburgh’s ever had in regulation. The only other instance came in the team’s 19-16 overtime win against the Buffalo Bills on November 28, 2010.

The last time the Steelers ran the ball more often came in 2006 when they did so 52 times in a 27-7 win against the Cleveland Browns.

– Despite the 45 rushing attempts, 36 of them by running backs/fullbacks, Pittsburgh didn’t have a run longer than 10 yards between that group. Steven Sims had the long of the day, a 22-yard gain.

– It’s also the first time since Week 3 of the 2020 season the Steelers rushed for three touchdowns in one game. It’s only the seventh time of the Mike Tomlin era.

– Pittsburgh scored touchdowns on their first two drives of this game, the first time they’ve done that since Week 6 against the Tennessee Titans of the 2020 season.

– This is Mitch Trubisky’s second rushing TD of the season but a stat worth revisiting even if it was true for his first one. Trubisky now has a rushing TD in six straight seasons, every year since he entered the league in 2017. He’s one of 18 total players in the NFL with that sort of streak and one of just three QBs in the league entering the week. Just him, Kirk Cousins, and Dak Prescott. What a group.

– Diontae Johnson currently holds an NFL record. He has 77 receptions on the season without a touchdown. As of today, it stands as the most receptions by a wide receiver in NFL history without a score, surpassing Raymond Berry’s mark of 75 set in 1961. Now, it’s possible other players had more and then caught a TD pass later in the season that I’m not certain of. But I am certain that if Johnson doesn’t find paydirt the next three weeks, he will claim the record for a wide receiver.

Next up is the all-time leading record regardless of position. That’s held by Tampa Bay RB James Wilder who had 85 in 1984. Roger Craig, who had 81 in 1986 is the one other name ahead of Johnson.

Johnson is going to end the year with more than 85 receptions. It’s just a matter of whether or not he scores. If he doesn’t, he’ll hold an infamous record.

– Johnson had a good game Sunday but finished with 10 receptions for 98 yards. He’s the first Steelers’ wide receiver with 10+ receptions and less than 100 yards since Antonio Brown had a 10/96/1 line in a 2016 win over the Baltimore Ravens. Johnson’s line nearly matches his seasonal numbers, coming into the game averaging 9.7 yards per reception.

– Okay, a positive Diontae Johnson stat. He caught all 10 of his targets yesterday, becoming the first Steelers’ receiver since Antonio Brown in 2017 to do so with a minimum of 10 targets. Brown caught all 11 of his that day. Dating back to 1992, Brown (who did it three times, twice in 2014 and that 2017 game) and Johnson are the only Steelers’ wide receivers to have that kind of game.

Entering the week, Johnson becomes the only wide receiver in the league to achieve that feat this season (I’m writing this before the Sunday’s games data is uploaded) and the first wideout since Arizona’s Rondale Moore last year. Since 2020, only Stefon Diggs (who did it twice) has a 100% catch rate on 10+ targets.

– The Steelers went on a 21-play drive to open up the third quarter, the longest drive they’ve had since at least 2001 and the first by Pittsburgh over that span. It’s the first by any team since the 2019 San Francisco 49ers. Since ’01, the only team to have a longer drive than the Steelers’ 21 plays was the New Orleans Saints in 2007… who also did it against the Panthers. A 24-play drive, but the Saints lost that game.

– After failing to throw a TD pass yesterday, the Steelers have just nine through 14 games. Since the 1970 merger, that’s only happened to them in one other season. 1989.

– T.J. Watt set the record last season, but he picked up the 21st multi-sack game of his career against the Panthers. That’s the most in team history. In second place is James Harrison’s 19. Cam Heyward registered his 12th such game yesterday.

– Pittsburgh held the Carolina Panthers to zero rushing first downs. The Steelers haven’t done that to an opponent since 2015 against the Indianapolis Colts.

The Panthers also rushed for 21 yards, the fewest allowed by the Steelers since a different 2015 game when the Cleveland Browns had just 15 in a 30-9 Steelers’ win.

– From 2015 to 2020, the Steelers’ opponent ran at least 46 plays in a game. Over the last two years, the opposition has been held to 45 or fewer a whopping three times. It’s happened twice this year, both since the bye: the New Orleans Saints running 45 in Week 10 while the Carolina Panthers had just 43 yesterday. But neither are as few as the Cincinnati Bengals, who only needed 42 plays to beat the Steelers 24-10 last season.