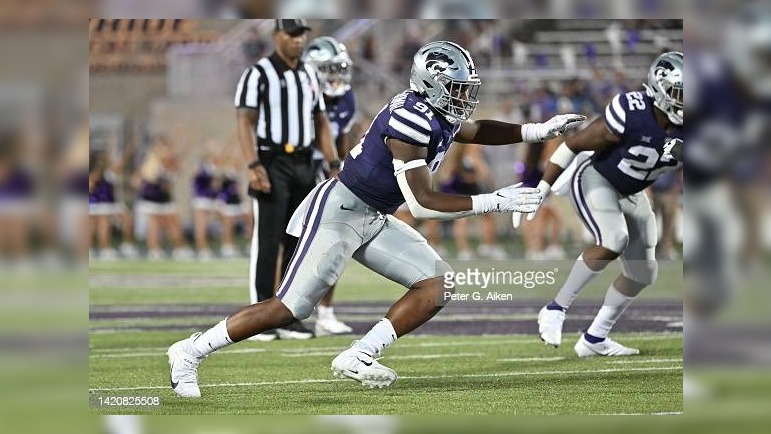 The Utah Utes came back to unseat the USC Trojans as a CFB hopeful Friday night, winning 47-24. The offense lit it up for the Utes, but CB #1 Clark Phillips III represented himself well in coverage against a dynamic passing attack. The 5’10, 183lb cover man is only a redshirt sophomore, but he has quickly become one of the country’s most feared defenders in the secondary.

He showed promise last season but has taken his game to another level to the tune of six INTs, two of which he has returned for two scores. Philips is a good enough athlete to run with most receivers in coverage stride for stride and possesses the aggressiveness, ball skills, and instincts to be a ballhawk who makes splash plays.

The Wildcats took home the victory against Big XII conference foe TCU, winning the conference title 31-28. The Wildcats successfully spoiled the Horned Frogs’ perfect season and EDGE #91 Felix Anudike-Uzomah was a big reason for that. He posted five total tackles, a TFL, and a sack against TCU. Anudike-Uzoah was a terror off the edge thanks to his combination of explosiveness and relentless motor hunting down the opposing team’s QB. Coming off an 11-sack campaign in 2021 and being touted as one of the top pass rushers in this year’s draft class prior to the season, Anudike-Uzomah is checking the boxes to come off the board in the first 50 picks of the 2023 NFL Draft.

The Green Wave won their first AAC Championship game yesterday, beating the UCF Knights 45-28. LB #2 Dorian Williams had himself a day on the defensive side of the football for Tulane, making playing all over the field for the Green Wave. He posted ten total stops, a sack, and a PBU on the game, taking his totals to 114 total tackles, five sacks, seven PBUs, two INTs and two forced fumbles on the season.

The 6’2, 225lb senior has been a field general, making plays against the run, as a pass rushe and in coverage. He is an instinctive player and should be drafted in the middle rounds as a rotational player to start his career with the opportunity to work his way into a starting role.

The top-ranked Georgia Bulldogs blew out the LSU Bulldogs Saturday by a score of 50-30, securing their second-straight SEC crown. DL #88 Jalen Carter once again posted a strong performance as he posted three tackles, four QB hurries, a sack, and one pass breakup. Carter is on a hot streak, having displayed the dominance of a blue-chip interior defensive lineman thanks to his sheer strength, power and explosiveness to man-handle opposing OL. Widely regarded as the top IDL prospect in this draft class, and possibly one of the best overall players in the 2023 NFL Draft, Carter has cemented himself as a top five selection this spring and will add to his resume in the CFP.

The Clemson Tigers defeated the North Carolina Tar Heels 39-10 to stay atop of the ACC Conference. The Tigers made a change at QB, putting in Cade Klubnik to help spark the offense. Still, the defense came up big in the win with DL #13 Tyler Davis standing out with three total tackles and half a sack.

The 6’2, 300lb senior may not have the measurables or freaky athleticism that teammate Bryan Bresee or Myles Murphy have, but Davis is a strong, stout defender in the middle that plays with great effort against the run and can generate a pass rush thanks to his leverage and motor. Built in a similar mold to former Clemson DL Grady Jarrett, Davis should be a name to watch throughout the pre-draft process as a potential mid-round value selection.