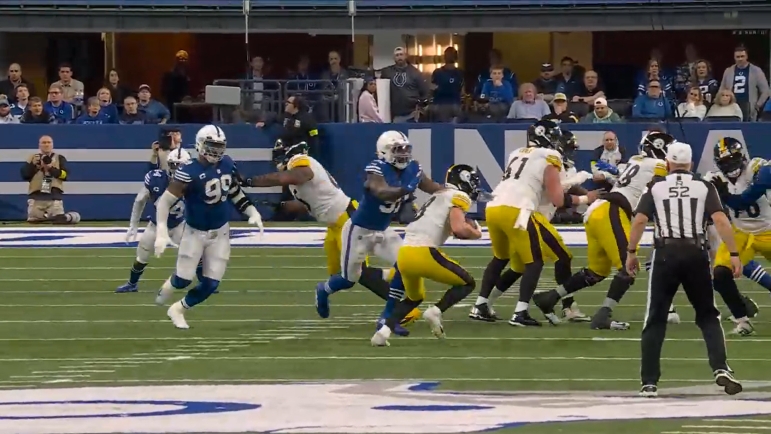 Breaking down the three sacks the Pittsburgh Steelers allowed in their Week 12 win over the Indianapolis Colts.

Eyes on LT Dan Moore Jr. here. #91 Yannick Ngakoue did his homework and saw how effective Cincinnati Bengals’ DE Trey Hendrickson was with his bull rush against Moore a week ago. Here, Ngakoue goes with the bull rush that walks Moore into the pocket. Moore’s hands are high leading his punch to be weak and he’s run back into Kenny Pickett’s lap. 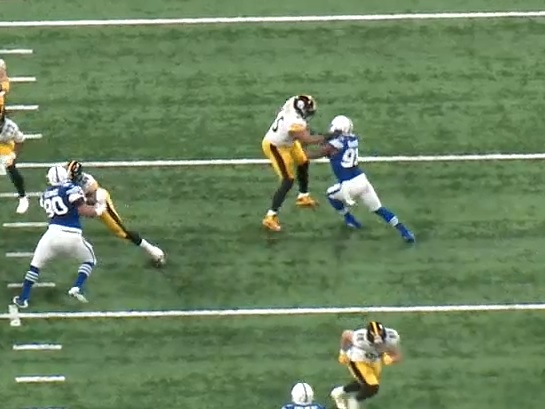 Pickett tries to climb and then bail. He probably could’ve kept eyes downfield and hung in the pocket, potentially hitting the checkdown in RB Najee Harris and letting him try to make a play but the pressure Moore allows here is obvious. It leads to the sack so this one is on him.

I broke this play down earlier in the week so please click the link here for the full details. But in short, the Steelers are in empty protection, the Colts Mug the A gaps and show an interior pressure look, forcing Pittsburgh’s offensive line to pinch and respect those potential A-gap rushes.

It leaves the RDE unblocked, this is by design, meaning this throw has to be “hot” in that the ball has to get out immediately. Pickett doesn’t change the protection and waits for RB Anthony McFarland to run his Texas/angle route which just requires too much time.

It’s the second straight week the Steelers have struggled against this empty look. I want Pickett to recognize that and get the ball out quick but I’ll also knock OL Coach Pat Meyer for not building in enough answers to these sim pressures. They’ll keep being tested until they get it right.

Blame: Half on Kenny Pickett, half on OL Coach Pat Meyer

Finally, another instance of the Steelers’ line, especially that right side, struggling against stunts. That’s what the Colts run here with a nickel blitz. Center slide away leaving RG James Daniels and RT Chukwuma Okorafor dealing with the T/E stunt.

#54 loops in free here. Think Daniels didn’t realize the stunt was coming and is reacting to the DT shooting the gap here. Daniels jumped inside here initially with the tackle shaded inside and then jumped back out and never realized the stunt was coming. Creates all kinds of pressure.

Elsewhere, RB Benny Snell gets put on his butt which eliminates Pickett’s escape lane. Combine those things and you get a sack with relative easy blame to dish out. Half on Daniels, half on Snell. This is the first time we’ve charged Daniels for a sack of any kind this season.

Blame: Half on James Daniels, half on Benny Snell