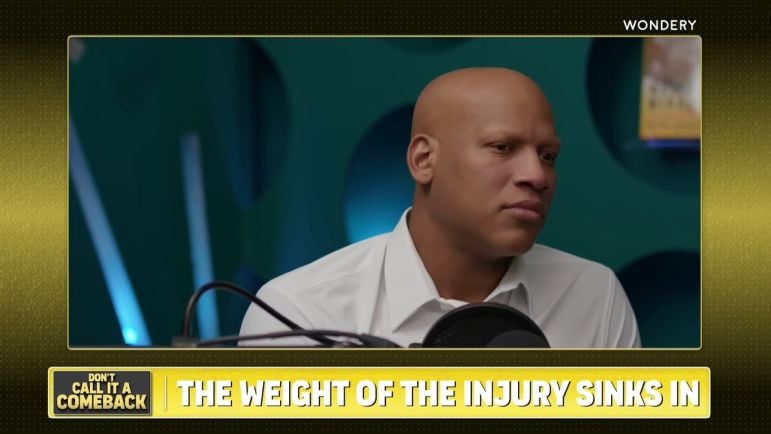 Ryan Shazier has a new podcast, Don’t Call It A Comeback, that shares his story and the stories of others. In the most recent episode, he and co-host Dave Dameshek relived Shazier’s career-ending injury suffered on December 4th, 2017.

Shazier retells the story of the hit he had on on Cincinnati Bengals’ WR Josh Malone that left him paralyzed and finished playing football.

“The biggest thing I can remember from that moment is once I hit the receiver on that route, my legs just basically, when I hit him I dropped immediately,” he said. “I couldn’t really move. It felt really weird. It was a weird feeling. I had a burning feeling in my back.”

Laying on the field, Shazier says doctors immediately ran tests to see if he could feel anything. He wasn’t able to but even knowing those serious warning signs, Shazier says his mind was focused on his family.

“I just took my mind off what was going on at the time and focused on my family. Trying to make sure my wife was happy and trying to get [a dog I just bought home].”

He was stretchered off the field and transported to a nearby Cincinnati hospital. While it was a scary moment, there was one familiar face by him during those first crucial hours – Dr. David Okonkwo, the Steelers’ team neurosurgeon, who Shazier said only travelled to one away game a year. The Bengals’ game happened to be his lone away trip of the season and it proved to be a critical one. Without the incredible team of doctors who acted so quickly, Shazier’s recovery could’ve looked far different.

On top of his injury, a week later Shazier got sick while in the hospital. After originally admitting he was “in denial” about it, he understood how seriously hurt he was. Shazier tells the story of him throwing up on himself, unable to move out of the way.

“When that happened, I was saying, ‘I’m in really bad shape, Ryan.’ I was acting naïve about how bad I was. I was almost in disbelief.”

But that moment shaped his mission to get healthy and walk again. True to his word and commitment, Shazier would regain movement in his legs and now lives a normal and healthy life with his wife and kids. And though his football career ended, Shazier officially retired in September of 2020, he’s moved on with his life’s work. He’s written a book, started a trucking company, and dabbled in the media space, including this podcast, while serving as an inspiration to so many.

Again, you can check out Shazier’s podcast and all other episodes by clicking the link here.