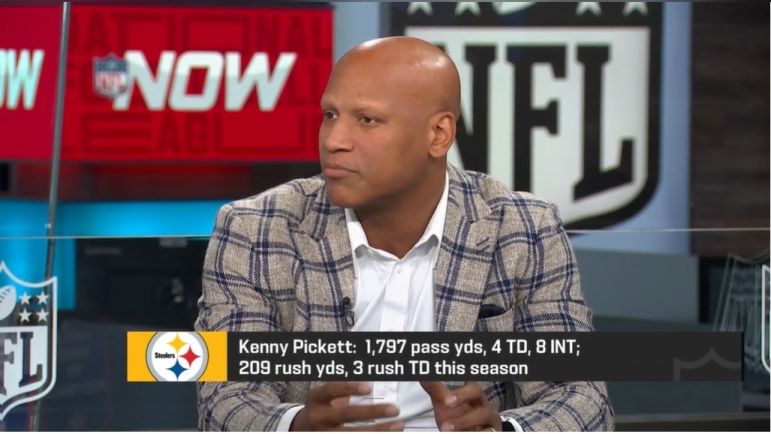 Former Pittsburgh Steelers linebacker Ryan Shazier joined NFL Network today to talk about his podcast and his former team. When talking about the Steelers, Shazier was asked his thoughts about their rookie quarterback Kenny Pickett.

Shazier, like most of the fanbase, is liking what he has seen from Pickett, referencing that Pickett got thrown into a moving car and is starting to figure it out now.

“I’m really excited with what I’m seeing from Kenny Pickett right now” Shazier said. “After this bye week he’s been playing really well. At the beginning of the season, obviously, he had a few turnovers, but that’s what happens when you get thrown in in the middle of the season you don’t have a lot of chemistry with your guys. In camp he didn’t play with them, at the beginning of the season he wasn’t really practicing with them very much, and the only guy he really had chemistry with was George Pickens.

“And now he’s starting to get more chemistry with the o-line, with the running backs, with the receivers, and you can see in the last two or three games he hasn’t really turned the ball over and that’s putting us in a position to win.”

Shazier talked about how Pickett did not get much time with the starters during camp, not allowing him to build much chemistry with players like Diontae Johnson, Pat Freiermuth, or Najee Harris. Pickett started camp at the third string quarterback, but by the end of it he ended as the team’s number two quarterback.

Given Pickett’s reps with mostly backups it took him longer to build a quarterback receiver connection with some players, with it being most apparent with Diontae Johnson in Pickett’s first few games.

However, these reps with the backups have helped the team have unexpected contributors. Rookie tight end Connor Heyward caught a big touchdown pass this past weekend against the Atlanta Falcons. Pickett and Heyward have often talked about how they have a strong connection due to all the time they played together in training camp in preseason. Because of this Heyward has seen a lot more offensive snaps this season than many would have guessed before training camp started.

Now though, Pickett has built a connection with many receivers throughout the offense, as he has been known to spread the ball around recently. Instead of targeting his top one or two receivers often, it feels like almost everyone on offense is getting a pass coming their way. In Atlanta, ten different Steelers receivers received a target.

One player who we are really seeing Pickett grow a connection with is Freiermuth. He’s been his go to target in big situations, and with his sure hands he has come up with plenty of catches. Former quarterback Ben Roethlisberger has said a few times that Bruce Arians texted him after the Steelers drafted Freiermuth and told him that the tight end was like Heath Miller. It is seeming that Freiermuth and Pickett are building a similar rapport with each other that Roethlisberger in Miller had.

Pickett is still only in his rookie season and still has a lot to improve. However, we are seeing more and more former players, and analysts say that they like the way Pickett is trending and that he can grow into a really good quarterback. Shazier was a great player on defense, and he would know what a good quarterback looks like. If Pickett can continue to build chemistry with his teammates and improve in the areas he struggles, he will be the answer for the Steelers question on who will replace Roethlisberger.