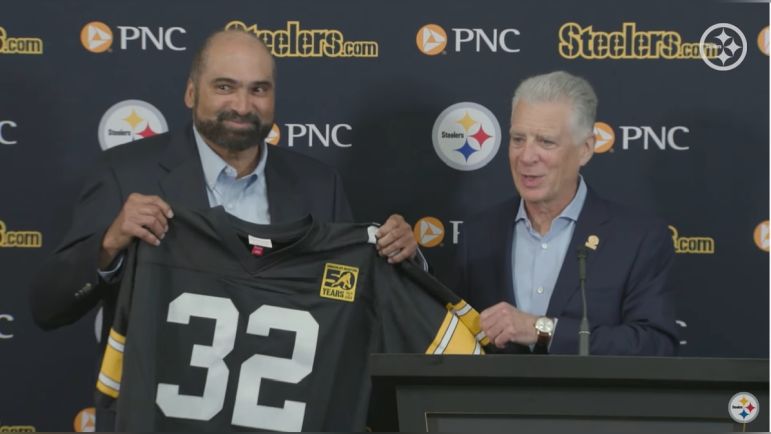 If we’re being honest, Franco Harris was the standard for the Pittsburgh Steelers.

That standard will have to be upheld without him moving forward though, as Harris died Wednesday at 72 years old, just two days from the 50th Anniversary of arguably the greatest play in NFL history, the Immaculate Reception, and three days away from having his No. 32 jersey retired by the Steelers franchise, marking just the third player in the franchise’s illustrious history to be honored with a jersey retirement.

The news of Harris’ passing is rather shocking. The first-round pick in 1972 out of Penn State helped changed the trajectory of the Steelers right away as a rookie in the 1972 season with the Immaculate Reception against the then-Oakland Raiders at Three Rivers Stadium, giving the Steelers their first playoff win in franchise history, setting off a dynasty run in the 70s that made the black and gold the shining standard for professional football.

Former Steelers players, coaches and fans across the world have reacted with heartfelt messages regarding Harris’ death Wednesday. That now includes Steelers owner and President Art Rooney II, who released a statement Wednesday morning, stating just how difficult it is to find the appropriate words to summarize Harris’ impact on the field and off the field for the Pittsburgh community.

“It is difficult to find the appropriate words to describe Franco Harris’ impact on the Pittsburgh Steelers, his teammates, the City of Pittsburgh and Steelers Nation,” Rooney said in a statement released by the team. “From his rookie season, which included the Immaculate Reception, through the next 50 years, Franco brought joy to people on and off the field. He never stopped giving back in so many ways. He touched so many and was loved by so many. Our thoughts and prayers are with his wife Dana, son Dok, and his extended family at this difficult time.”

While Harris was a tour de force on the field for the Steelers as a Pro Football Hall of Fame running back that still holds the mark for most rushing yards in Super Bowl history with 354 yards, he was arguably more impactful off the field, especially for those that knew him well.

Steelers head coach Mike Tomlin called Harris a “special man” during his weekly press conference Tuesday, citing his work off the field and his commitment to Pittsburgh and the investment in young people he made throughout his post-playing days, while current Steelers running back Najee Harris said Harris was “cool as hell” last week during his media session and recalled Harris showing up to his own foundation event after leaving an Alumni Weekend event early to show support to a current Steeler.

That’s who Harris was since becoming a member of the Steelers in 1972.

Though he is gone, his impact will live on in the Steel City for generations to come. It’s hard to put into words, much like Rooney said.