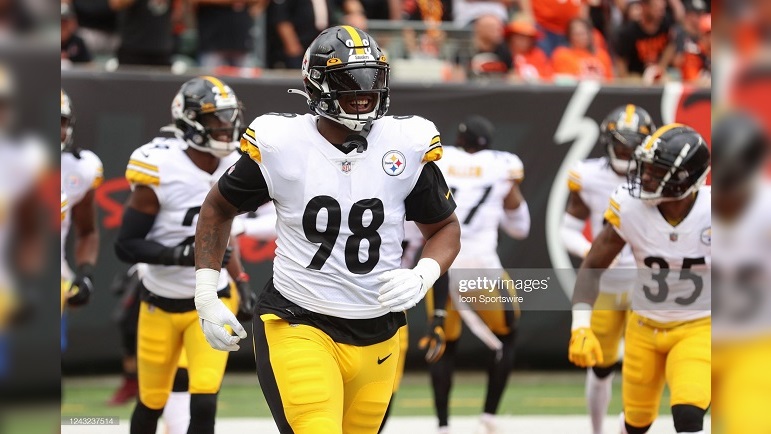 But to beat the Carolina Panthers Sunday, the Pittsburgh Steelers’ bench went about 16-men deep.

Holding the Panthers to less than 30 yards and zero first downs, one week after Carolina put up over 200 on Seattle, is a remarkable achievement. While credit should be evenly spread out, two rookies in DeMarvin Leal and Mark Robinson played key roles in getting the job done.

“They put unique big people, big people packages on the field. You gotta match that. I thought we did with DeMarvin Leal,” Tomlin said via Steelers.com. “I thought he did a good job.”

While we’ll have to go through the tape to see exactly how Leal was employed, he’s been used as a standup OLB for large parts of the year. Bigger than most OLBs, certainly moreso than the likes of Malik Reed or Jamir Jones, it helped match against the Panthers’ tendency to use a sixth offensive lineman and go as heavy as having eight on the field at once.

Highsmith also offered similar praise for Leal’s contributions. While Leal didn’t officially show up in the stat sheet, run defense is often as much about the plays that aren’t in the box score as the ones that are.

“DeMarvin Leal coming in, stepping up bringing another big body on the field just kind of helped us be more stout in the run game when they brought their extra bodies,” Highsmith told the media postgame.

Active for the third time this season, Robinson saw the first defensive snaps of his career in part due to LB Myles Jack being held out with a groin injury. While Robinson didn’t play many snaps, he was used against run-heavy looks and helped create a tackle for loss early in the first quarter of the game. Like Leal, Robinson didn’t officially register on the game sheet but his physical and downhill nature gave Pittsburgh another option to match Carolina. Everyone got the job done from veterans like Cam Heyward and Larry Ogunjobi to rookies like Leal and Robinson.

After getting beat up against the Baltimore Ravens one week ago, the Steelers turned the tide Sunday. They were the more physical team, they controlled the line of scrimmage. And it’s why they won this game.