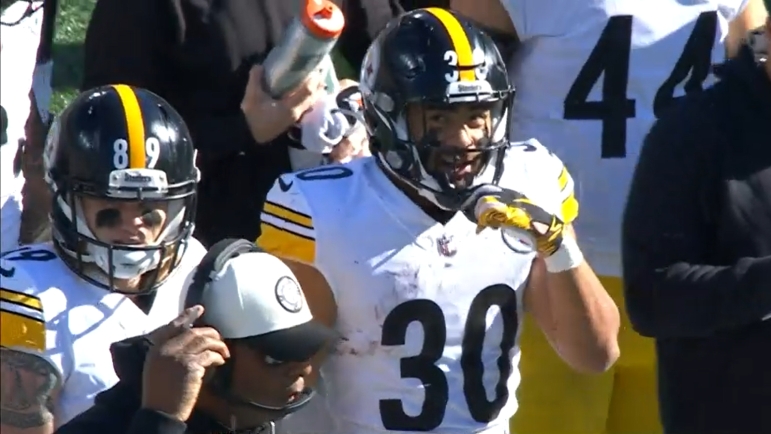 Throughout the season following each game I will be taking a look at the rookies and how they fared each week. This will consist of thoughts such as the positives and negatives of that game, areas to watch or work on, and clips to support what I’m sharing. Hopefully, this will shed some insight into some things you may or may not have seen.

It’s nice to see the team get the running game going. It would be really nice to see them use Pickens properly. Continually sending him on deep routes over and over again is wasting his abilities. I had him running a deep route 12 times, over half of his routes, targeted on just one of those. On the other levels, his most common route was a Curl.

His first target was a big gainer down the left sideline. He did a very nice job putting his hands up late to not alert the defender the ball was coming. He also used a slight push-off late to create space. His second target was on a Dig route into traffic that could have gotten intercepted or Pickens blown up by a defender. Target number three was on a deep Curl on the right side. After securing the catch he added two yards. Next was a deep Out route. The quarterback scrambled to his right and Pickens tried to work back to him. He stepped out of bounds in the effort but the ball was overthrown regardless. On his final target, the ball was tipped away by a defender.

Pickens was also called for a false start in the fourth quarter. It was his first false start and fourth penalty of the season.

Although many wide receivers have an alpha mentality many of them lack that mentality as a blocker. Pickens will throw an occasional shoulder but lacks the full effort on a regular basis.

Leal saw a dozen snaps this week with all but one coming on the defensive line. Eight of those plays were passing plays with two producing sacks by the defense. Leal’s pass rush overall is still a work in progress. The majority of his attempts are power rushes that aren’t really effective. He did have one good rush to walk the offensive lineman back to the quarterback.

His four run plays did not yield any statistics. On one stretch outside run in the red zone, he did a nice job to stretch the play toward the sideline and clog a running lane.

Here is the bull rush by Leal. He is across from the right TE (75) and will push him back to the quarterback.

Heyward had a rather uneventful day on offense. All four of his snaps were running plays.

The first two block attempts weren’t very effective including one where he was shoved inside by a defender. The third play he was leading outside on a fake jet sweep to the right but the ball went to the other side. His last play was the big run by Steven Sims. He was able to get a push on the safety to the inside opening the running lane behind him.

After the field goal in the fourth quarter, he was credited with an assisted tackle along with Arthur Maulet.

Here is the block by Heyward to spring Sims. He gets positioned nicely to push the safety (21).

The much-awaited defensive debut of Robinson finally arrived. He was used in assumed run situations against Carolina’s heavy personnel. Showing a ravenous demeanor getting downhill to the ball, he tracked the ball well, flowed in the right direction and had a nice gap fill on one play.

He did see two snaps against the pass. Both were covering the running back on a route to the flat and he handled those well.

Make sure to check out Alex’s video breakdown of Robinson’s debut.

It was a big week for Warren. He had touches on over half of his snaps, a new career high in carries and scored his first NFL touchdown.

Overall as a runner, he looked pretty good. There was a couple of plays where he could have been a little more patient to let blocks develop. His burst was really good. He can accelerate really well when he sees daylight. They ran the same exact play on consecutive plays in the red zone that produced a first down.

His vision inside the 10 and decision-making was impressive and he runs with good leverage limiting the times he can be stopped and pushed back. Late in the second quarter, he made a really impressive run to avoid two tacklers with stiff arms and hurdle a defender. He probably should have gotten out of bounds on the play though. It would have given them a chance to run a few more plays before the half.

This is an impressive play by Warren from this angle. You see two defenders have a chance at him and he is able to avoid both for a good gain.

In the passing game, he caught his only target on a screen pass gaining 15 yards after the catch and running over a defender. They tried a screen one other time but he got caught up in the middle of the line. As a pass protector, he had another couple of really good blitz pickups knocking back the heads of defenders with the force of his hits. He made a solid initial strike on another blitz but the linebacker got through him to get in on/finish a sack.

Here are the blitz pickups by Warren. Both came on big plays for the offense.