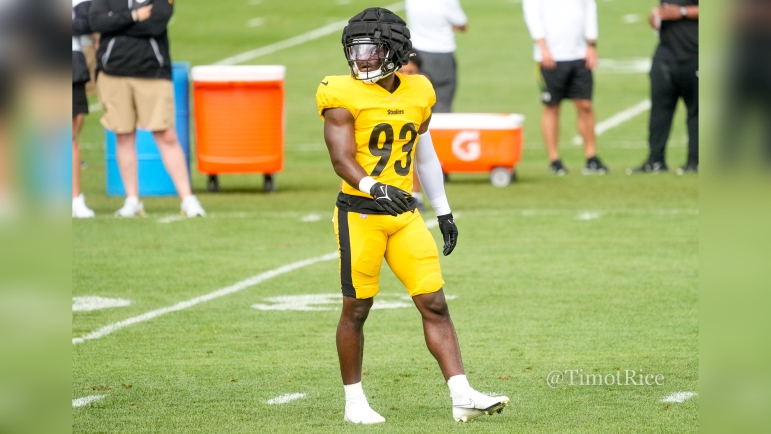 Throughout this season, Week One to today, there’s a quiet underbelly, a murmur, you’ll come across if you spend enough time on Twitter or in Steelers’ Facebook groups. Especially the Facebook groups. Hell hath no fury like the Top Steelers’ Fans Ever group after a bitter loss. The idea 7th round rookie linebacker Mark Robinson must be playing. His absence treated like a high crime, a violation of the Geneva Convention, a wrong that must be righted.

There’s a case to be made. Robinson was a camp darling, a run-and-hit rook who played beyond his age and experience. We praised him as much as anyone. But so far, Robinson has dressed for just two games this year, Week 6 and Week 12, playing five special teams snaps in the former and zero in the latter. Essentially, it’s a redshirt season.

And that’s okay. It’s how it should be.

Robinson impressed this summer. It was refreshing to see a linebacker who attacked, who played without fear in that embodies what an old-school Steelers’ linebacker looked and played like. We highlighted his performance throughout the summer, in part writing this in our post-camp recap.

“His quick see-to-do, his downhill nature, and his physicality – oh boy does he love to hit. He also displayed short-area quickness and change of direction ability in camp to make plays in 1v1 drills. What’s most impressive is he plays under control. He’s not out of his gap or running around without a plan. That controlled aggression for how young he is is unique.”

It’s still so early into his career and he’s yet to take a defensive snap but Robinson has the traits of someone with a future in the NFL. Still, sitting him on the bench is the right decision. Making plays in camp or during the preseason is one thing. It’s important, it’s the first step, the way to get noticed and begin climbing the ladder.

But doing it on Sundays, when everyone has their 1’s on the field, is a different story. Robinson remains a raw player playing largely off instinct, a running back just two years ago. If he played tomorrow, his run defense might be steady, it’s the bread and butter of his game. But coverage is another story. His limitations showed up in the summer, struggling to turn and run, and coverages have so many nuances and complexities that a raw rookie is going to struggle with. The preseason was little more than simple spot drops and manning up the back. It’s different at this point in the year and as Mike Tomlin’s made clear, Steelers’ inside linebackers are asked to do a lot in this system. I’m a proponent of “learn by doing” but only when a player is ready. Robinson isn’t there. Plus, he is doing a lot. In practice every day, probably working on scout team, absorbing and learning from quality coaches.

In front of Robinson are three veteran players: Myles Jack, Devin Bush, and Robert Spillane. No All-Pros in there, heck, not even any Pro Bowlers, but trusted guys with experience. And that group hasn’t played poorly. Spillane’s use as a dime defender is still confusing but those guys can communicate, adjust, and play on the fly. With the group largely healthy this season, not to mention core special teamer Marcus Allen, Robinson has lost out to the numbers game. It’ll likely remain that way the rest of the season.

If it’s Week 17 or Week 18 and the Steelers’ season is mathematically over and the team wants to dress Robinson, there’s nothing wrong with that. There’s value in getting a cup of coffee, getting on the field, making some plays, some mistakes, and having some film to pour over throughout the offseason. But if it doesn’t happen, Robinson will be back in the summer, no longer a wide-eyed rookie, and could make a serious push for playing time. Bush, Spillane, and Allen are all scheduled to be free agents this offseason. It’s doubtful all those players will leave, maybe even two of the three are retained, but there should be a clearer path in 2023.

Patience is key. It’s exciting to watch the new player instead of the same old thing. But the best thing for Robinson’s career is to learn and watch. He wasn’t ready for 2022. Maybe he will in 2023. He has a bright tomorrow. It just requires a quiet today.